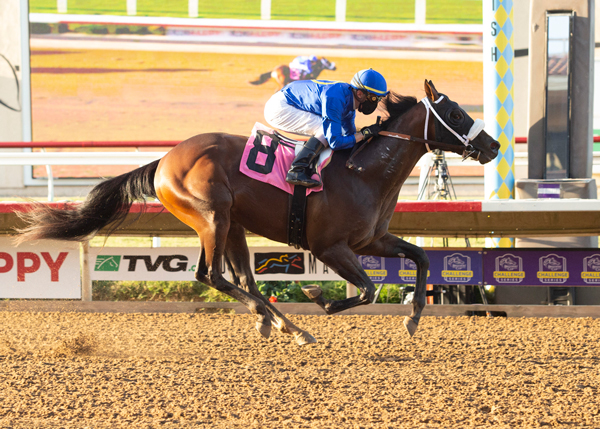 Six young horses will run seven furlongs Monday in the 73rd edition of the shore oval’s annual closer - the Runhappy Del Mar Futurity. The race will carry a purse of $250,000 and a Grade I ranking. And as it has many times before, it also likely will point out the winner for much bigger and better things to come on down the line.

The morning line favorite for the juvenile headliner will be Red Baron’s Barn and Rancho Temescal’s Dr. Schivel, a colt by Violence who was purchased privately by his current connections – father Jed and son Tim Cohen -- in the past few weeks. The bay easily had won a straight maiden race at six furlongs at Del Mar on August 8 after running second and third in a pair of previous outings.

Following that win, the colt’s then owners – and breeders – William Branch and Arnold Hill, heard an offer they couldn’t refuse and ceded ownership to his current pair of owners. Dr. Schivel will race for trainer Luis Mendez once more in the Futurity, then shift to conditioner Mark Glatt’s barn.

Spielberg, a $1,000,000 yearling purchase in Kentucky last September, is a son of Union Rags who has started only once, finishing second to Dr. Schivel in that one’s winning heat here on August 8.  He has the distinct advantage, however, of racing out of the barn of conditioner Bob Baffert who has won the Del Mar Futurity a record 14 times.

Dixie’s Two Stents was a weanling purchase for $60,000 in Kentucky in November of 2018. The son of Quality Road made his racing debut at Del Mar on August 1 and closed late to just miss in a five-furlong maiden special weight contest. He’s worked well at the shore oval since.

Weston enters the fray with a two-for-two record, including a tally in the Grade II Best Pal Stakes at Del Mar on August 8. The Hit It a Bomb gelding trains out of the barn of part owner Ryan Hanson and – in contrast to some of his Monday adversaries – was a bargain $7,000 purchase as a yearling last year in Kentucky.

Scooby is trained by Jerry Hollendorfer. Though still a maiden after two starts, he’s closed well in both of those outings.

Dyn O Mite has run second in all three of his tries. The son of Goldencents is conditioned by J. Keith Desormeaux.

Monday’s finale means that there will be a mandatory payout in the track’s popular Pick Six bet. It will be held on races 6 through 11.

The headliner will go as the 10th event on an 11-race card. First post Monday goes at 1 p.m.