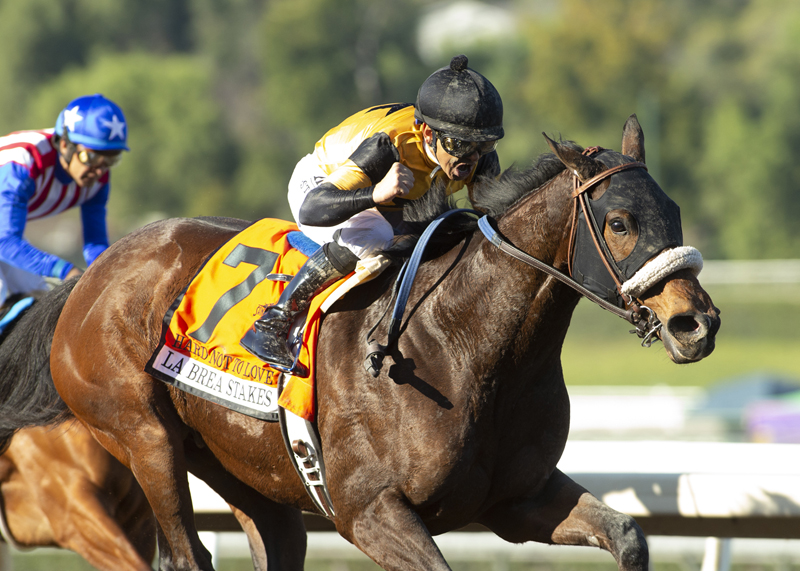 Hard Not to Love © Benoit Photo

Going in, the 50th edition of the Clement L. Hirsch Stakes looks like one of the best renewals yet of the Grade I headliner that is the premier offering at the Del Mar summer stand for older fillies and mares. There are only six runners for the mile and one-sixteenth test that offers a $250,000 purse, but a dandy half-dozen they are.

Five of them are stakes winners and three of those have rung the bell in Grade I tests. No doubt the horse who comes out on top Sunday is going to know she was in a serious horse race.

The morning line favorite in the Hirsch is West Point Thoroughbreds and Mercedes Stable’s Hard Not to Love, a 4-year-old filly by Hard Spun who only has one eye, but hasn’t let that stop her from compiling an excellent record. The bay Canadian-bred has won five of her eight lifetime starts and finished second twice and third once. She’s banked more than a half-million dollars and registered a Grade I tally in the La Brea at Santa Anita back in February under the steady care of trainer John Shirreffs.

The other two runners with Grade I honors on their resumes are Paul or Karen Eggert’s Ollie’s Candy, the winner of this race last year, and Bo Hirsch’s Ce Ce, a double Grade I victress already this year.

The Hirsch is a Breeders’ Cup “Win and You’re In” Challenge Race for the Breeders’ Cup Distaff, meaning the winner gets an automatic entry, including fees,  into that $2-million race that will be run at Keeneland in Lexington on Saturday, November 7.

Here’s the lineup for the Hirsch from the rail out with riders and morning line odds:

Ollie’s Candy has had an ambitious campaign since her Hirsch triumph here last July. She tried here luck in five graded stakes, including the Breeders’ Cup Distaff last fall at Santa Anita where she finished fourth. She also went to Arkansas and ran in the Grade I Apple Blossom this spring, losing by a head; then she shipped to New York to run in the Grade I Ogden Phipps where she came up a neck short. She has trained well of late at Del Mar for conditioner John Sadler.

Bo Hirsch, Ce Ce’s owner and breeder, is Clement L. Hirsch’s son. Obviously, it would be special for him to win this race, which was renamed (it was the Chula Vista Handicap) in 2000 following his father’s passing. Clement L. Hirsch, a WW II Marine and a highly successful business man and racehorse owner and breeder, was one of the founders of the Del Mar Thoroughbred Club, the group that has run the Del Mar race meetings since 1970. Ce Ce is conditioned by Mike McCarthy.

Fighting Mad comes into the Hirsch off a score in the Santa Maria at Santa Anita on May 31. She’s a 4-year-old homebred by New Year’s Day who has now won four of her seven lifetime starts.