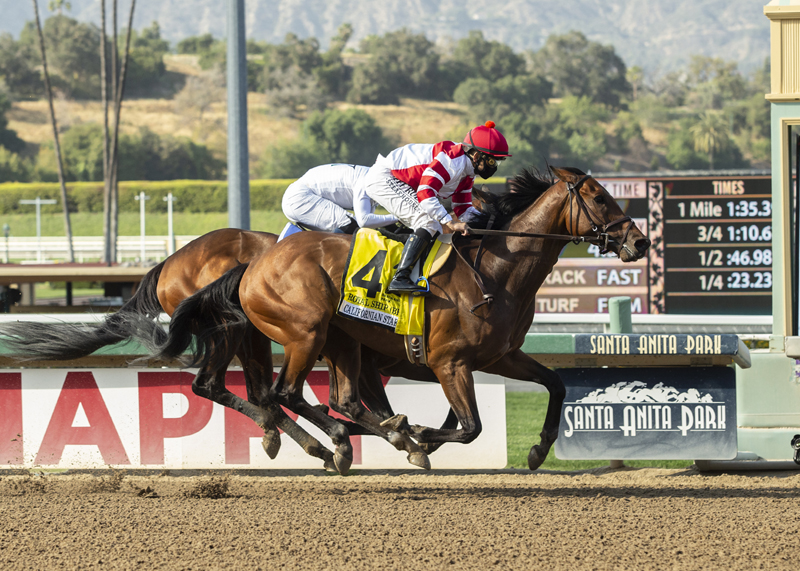 The Brazilian-bred 5-year-old Royal Ship has found his footing on dry land of late and could take a lot of beating at Del Mar Saturday as he heads a field of nine in the 80th edition of the $250,000, mile and one-sixteenth San Diego Handicap.

The gelded son of Del Mar’s 2008 Del Mar Futurity winner, Midshipman, fired two big shots at Santa Anita this spring, winning the Grade II Californian and being beaten a head in the Grade I Gold Cup. Both races were on the main track, a relatively new chapter for the South American who had raced primarily on the turf previously.

The bay will go postward Saturday with a couple of sizeable pluses in his sails. First, he’s trained by Hall of Famer Richard Mandella, always a good thing for a horse, especially so if you’ve come north from South America, a Mandella speciality. Then Royal Ship also gets the advantage of being guided by Hall of Famer Mike Smith, a man who has ridden more stakes winners then there are sailboats on San Diego Bay on a Sunday afternoon. The likely race favorite will pack topweight of 124 pounds and break from Post 4.

Second highweight at 123 and likely the favorite’s chief threat is CRK Stable’s Express Train, a hard-knocking colt by Union Rags who has won a graded stakes and been placed in three others thus far in 2021. The John Shirreff’s trained 4-year-old will get the saddle services of his regular partner, J. J. Hernandez, as they start their journey from Post 5 right alongside Royal Ship.

The San Diego is considered the shore track’s key prep race for its centerpiece – the $750,000 TVG Pacific Classic, which this year will be run on Saturday, August 21. It goes at a mile and a quarter for 3-year-olds and up.

Also on the Saturday card is the Osunitas Stakes, an overnight for fillies and mares that carries an $80,000 purse. The mile on the turf has drawn a field of nine, including a pair out of trainer Richard Baltas’ barn in Nasty and Ippodamia’s Girl.