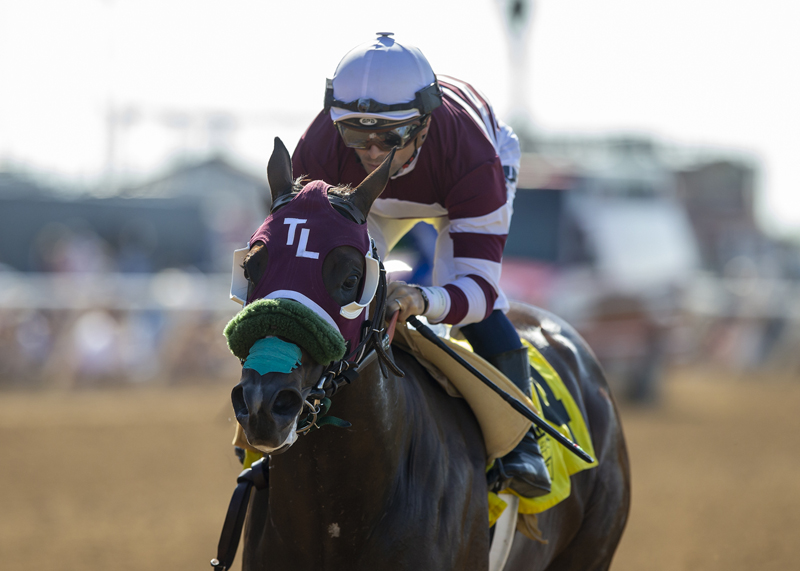 Lovingier, London or Zondlo’s Rock N Rye scampered home by four and a quarter lengths in Sunday’s $100,000 Graduation Stakes at Del Mar, then had to withstand a rider’s objection before he was made the official winner of the five and one-half furlong dash for California-bred juveniles.

The race originally had six youngsters entered, but two scratches reduced the field to four and cancelled show betting. The winner covered the distance in 1:05.77.

Umberto Rispoli rode Rock N Rye, who is trained by Walther Solis. The Stay Thirsty colt was bred by owner Terry Lovingier. The dark bay or brown juvenile picked up a check for $57,000 and increased his earnings to $100,920.

Finishing second in the stakes was McMahon or Rudy’s Trip to Spain and running third was Mr. T’s Thirsty, also owned by Lovingier along with his partner Templeton Horses.

Rider Kyle Frey on Trip to Spain lodged his objection because Rock N Rye crossed over in front of him just inside the eighth pole. The stewards took a quick look at the replay and then stated the incident did not warrant a disqualification.

UMBERTO RISPOLI (Rock N Rye, winner) – “I don’t know what he’s objecting to (the rider on Trip to Spain). He’s objecting against nothing. My horse was very professional today. Very mature for a 2-year-old. Once I got him to switch leads it was all good from there.”

WALTHER SOLIS (Rock N Rye, winner) – “This horse is getting better each start and I think as he continues to mature he’ll be able to handle longer distances. I wasn’t worried at all (about a rider’s objection) because he was in the clear when he crossed over. There was no reason for the objection.”

The stakes win was the second of the meet for rider Rispoli, but his first in the Graduation. He now has 10 stakes wins at Del Mar.

The stakes win was the first of the meet for trainer Solis and his first in the Graduation. He now has two stakes wins at Del Mar.

The winning owners were Terry Lovingier (from Long Beach, CA), Tom London and Eugene Zondio. Lovingier is also the breeder of the horse.