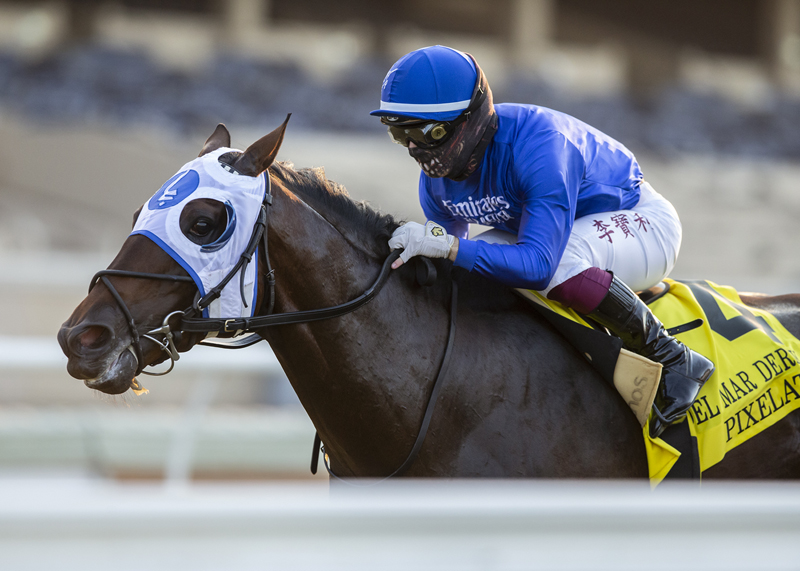 Godolphin’s Pixelate, benefitting from yet another perfectly timed ride on the turf by Del Mar’s leading rider, Umberto Rispoli, was along in time to score by a head in the 76th running of the $200,000 Del Mar Derby Sunday at the shore oval.

The invader from the east coast -- trained by Michael Stidham -- had a near perfect trip saving ground and laying third for most of the run, then put it in gear down the lane for the Italian journeyman who is riding like a star in his first season at Del Mar. It was the fourth winner on the afternoon for Rispoli giving him a one-win lead – 49 to 48 -- over his ace counterpart, Flavien Prat, who had a pair of victories on the card, including a stakes score that was his 14th of the meet, a Del Mar riding record. The battle for supremacy between these two exceptional riders at this 81st summer stand will come down to the 27th and final day of the meet tomorrow.

Earlier on the card, Kaleem Shah’s Madone split horses at the head of the stretch and went gamely through the stretch under Flavien Prat to capture the ninth running of the $75,000 Del Mar Juvenile Fillies Turf at a mile on the grass by a half length.

The victory gave rider Prat his 14th stakes win of the meeting, establishing a new mark for stakes scores in a single summer session. Previously, Rafael Bejarano held the record with 13 victories set in 2012.

CYBT, Nentwig or Altamira Racing Stable’s Nimbostratus was second across the line, but moved back to third for interference in the stretch with LNJ Foxwoods’ Ivy League, who was moved up from third to second.

Del Mar’s closing card will take place tomorrow on Labor Day with an 11-race program on tap. First post will be at 1 p.m.

UMBERTO RISPOLI (Pixelate, winner) – “I talked to Mike (trainer Michael Stidham) this morning and we both agreed that we had the best horse in the race. I said I wanted to ride him up closer than normal for him; I told him this is a smaller tighter course, not like Churchill (Downs). He said: ‘You ride him like you want to.’ I had a great trip and he fired when he had to. I’m very happy. And I’ve waited 16 years (his riding career) to wear these (pointing to the Godolphin royal blue silks).”

GARY MANDELLA, deputizing for Michael Stidham, (Pixelate, winner) – “My dad (Richard Mandella) and Michael have been friends for a long time. Michael sends his horses here to my dad’s barn and dad sends his horses back east to Michael. I’m happy to help him win a big race. The horse arrived Thursday, galloped a couple days and he was ready to go. We didn’t do anything. My instruction to (jockey Umberto Rispoli) was ‘Did Mike call you? Yes? Then good luck.’”

The stakes win was the eight stakes win of the meet for rider Rispoli in his first season at Del Mar.

The stakes win was the first of the meet for trainer Stidham and his first in the Del Mar Derby. He now has five stakes wins at Del Mar.

The winner is owned by Godolphin, the racing arm of Sheikh Mohammed bin Rashid al Maktoum of Dubai.