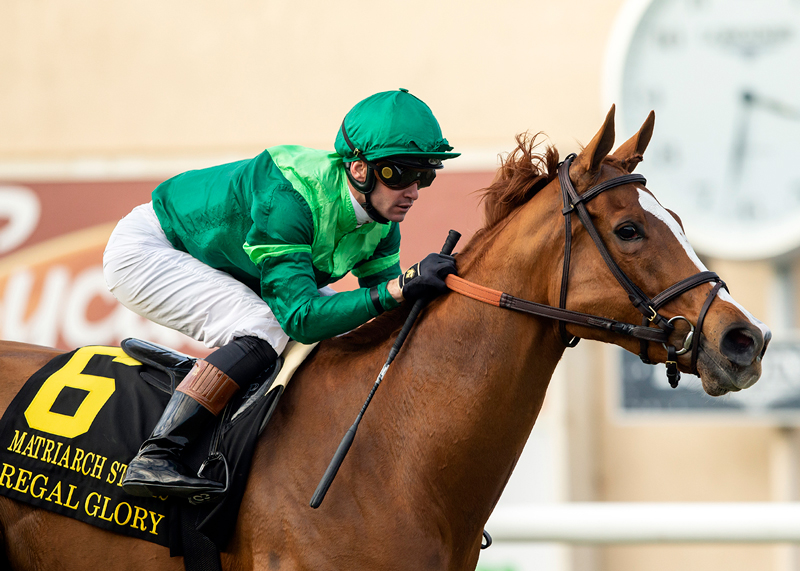 Peter Brant’s grand racemare Regal Glory closed out her exceptional career with a second straight triumph in Del Mar’s Grade I, $401,500 Matriarch Stakes Sunday on closing day of the 2022 fall meet at the seaside track.

The 6-year-old daughter of Animal Kingdom raced to a five and a quarter-length tally in the turf track mile and she ran it in 1:33.60, second-fastest time for the headliner since it was shifted to Del Mar nine years ago.

Regal Glory was handled by Flavien Prat as he won his fifth race of the day and ensured he would be the leading rider at the meet. He subsequently won the nitecap on the Del Mar card and finished with 24 firsts in 86 mounts, a very healthy 28% winning rate. It was his sixth local riding title and second one in the fall. Prat had previously won six races in a day at Santa Anita on May 18, 2020.

Chad Brown trains Regal Glory and he was capturing his fifth edition of the stakes, including last year’s running.  Regal Glory now will be retired from racing.

Finishing second in the Matriarch was Mercedes Stables, West Point Thoroughbreds and partners’ England’s Rose, who had just a nose on Bobby Flay’s Pizza Bianca.

Earlier in the final card, Pegram, Watson and Weitman’s Speed Boat Beach raced to a half length victory in the $101,500 Cecil B. DeMille Stakes at a mile on the turf.

Bob Baffert trains Speed Boat Beach and the stakes tally was his 156th at the shore oval, a mark that puts him more than 70 winners ahead of his next pursuer.

Racing will resume at Del Mar next July.

FLAVIEN PRAT (Regal Glory, winner ) – “I had great respect for Mike’s (Smith) filly (Hamwood Flier, who had gone eight in front at the three-quarters), but there was nothing I could do about it then. My mare had to run her race. Once she got going, I knew we were going to be all right. Then she did and we were all right.”

JOSE HERNANDEZ (Assistant trainer for Chad Brown, Regal Glory, winner) – “She broke a little slow and he (Flavien Prat) tried to relax her on the backside, but I don’t worry about it. Those kind of fillies just kick off and it was amazing. We’re going to miss her. We’ve had a lot of nice moments, a lot of nice races.”

The stakes win was the sixth of the meet for rider Prat, but his first in the Matriarch. He now has 86 stakes wins at Del Mar, 10th most among all riders.

The stakes win was the second of the meet for trainer Brown and his fifth in the Matriarch. He now has 16 stakes wins at Del Mar.

The winning owner is Peter Brant of Greenwich, CT.