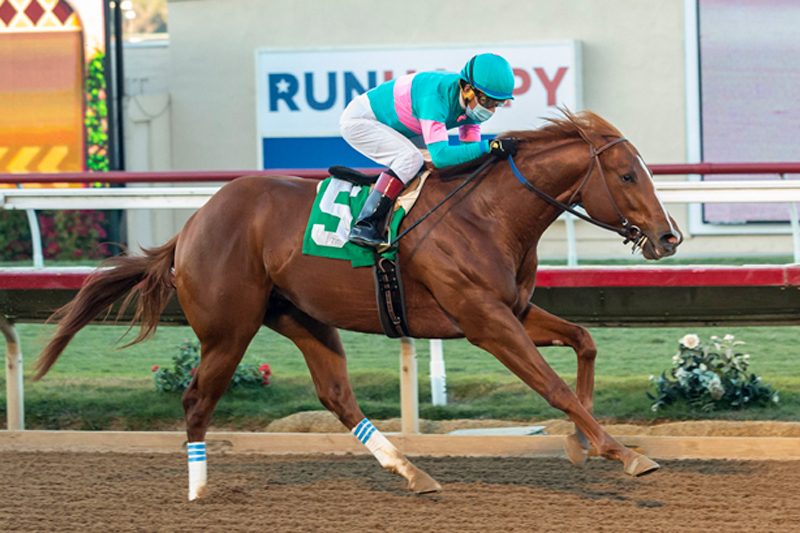 The million dollar yearling Spielberg went off as the odds on favorite, but it was Red Flag – who ‘only’ cost $220,000 at the same Kentucky sale – flying home the winner Sunday at Del Mar in the seventh edition of the Grade III Bob Hope Stakes for 2-year-olds.

Red Flag, a son of the Speightstown stallion Tamarkuz, battled early with his more-expensive rival, but assumed command under Victor Espinoza approaching the quarter pole and drew out under a hand ride to an easy seven and a quarter length triumph. The victory was worth $60,000 from the $100,500 purse and pushed the youngster’s earnings to $94,100 after three starts. He covered the seven furlongs in 1:23.56.

Red Flag is owned by Tina and Jerome Moss of Los Angeles and is trained by John Shirreffs. The chestnut colt’s green and pink colors were familiar ones to those who followed the amazing career of the champion mare Zenyatta, owned by Moss and trained by Shirreffs.

Finishing second was Eric Homme’s Uncle Boogie and third was Reddam Racing’s Ambivalent. Spielberg, who is owned by a group that includes SF Racing, Starlight Racing or Madaket Stables and others, and went off at 3-5, finished fourth nearly 10 lengths behind the winner.

Leading rider Abel Cedillo and leading trainer Peter Miller won the nitecap together with Magical Thought ($20.60) and stayed on top in each of their categories after eight days of the current 15-day session. Cedillo now has 13 firsts and Miller has seven. Cedillo was the top rider at last fall’s Bing Crosby meet and Miller has won four different versions of the “second season” at Del Mar.

Del Mar will return to action on Friday with first post at 12:30 p.m.

VICTOR ESPINOZA (Red Flag, winner) – “John (trainer Shirreffs) said ‘You know him (Espinoza broke his maiden on him last out on October 10 at Santa Anita), go ahead and see what you can do with him.’ He broke running and he wanted to go. He seemed to be more professional today than last time. He’s still a baby and he was fooling around before. Be he was good today and did all the right things. He’ll go farther, for sure. With the way he ran today, why not?”

JOHN SHIRREFFS (Red Flag, winner) – “I didn’t really expect that kind of performance. I was hoping to get a placing. He broke his maiden from way off the pace and he’s been doing better and better in the mornings, but he’s not a brilliant work horse. So this was a pleasant surprise. You always hope but you never know. He’s gone from 5 ½-furlongs to seven, so it looks like he’ll be able to go longer. It’s special because (owners) Mr. and Mrs. Moss were here today and got to see him run.”

The stakes win was the first of the meet for rider Espinoza, but his second (Greyvitos in 2017) in the Bob Hope. He now has 105 stakes wins at Del Mar, third most of all time.

The stakes win was the first of the meet for trainer Shirreffs and his first in the Bob Hope. He now has 17 stakes wins at Del Mar.

The winning owners are Tina and Jerome Moss of Los Angeles.