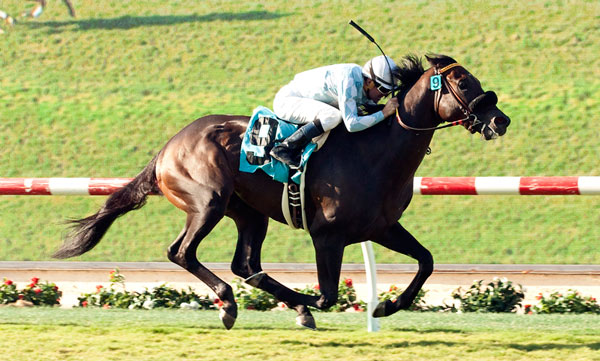 Mr. and Mrs. Martin Wygod’s talented Prospect Park, whose path to the Kentucky Derby was compromised by a series of mishaps this spring, put the past and eight rivals behind him Sunday with an impressive performance in the featured Grade III $150,000 La Jolla Handicap.
With Hall of Famer Kent Desormeaux patiently biding his time in a prominent close-up position on the outside, Prospect Park swept by the pacemaking 7-5 favorite, Om, turning into the stretch and continued on powerfully to score by four and one-quarter lengths in 1:41.54 for the mile and one-sixteenth over Del Mar’s infield Jimmy Durante Turf Course. He accomplished his final sixteenth of a mile in less than six seconds.
Considered a leading Derby contender on the West Coast early in the year, Prospect Park was sidelined with a virus after finishing fourth in the Santa Anita Derby in early April, causing the colt to miss the Kentucky Derby and other Triple Crown races. He returned to competition in June and was runner-up to Gimme Da Lute in the Affirmed and then was nosed out by the same rival in the Los Alamitos Derby on July 4. Sunday marked his debut on grass.
Om, ridden by Fernando Perez, held on well for second, two and one-half lengths in front of longshot Royal Albert Hall, with Papacoolpapacool fourth. Tried and True was scratched from the original field.
Prospect Park, a son of Tapit bred by the Wygods in Kentucky, earned $90,000 with his third win in ten starts and now has a career money total of $396,570. The La Jolla was his initial stakes success.
A 2-1 second choice, Prospect Park, a likely favorite in the Grade II $250,000 Del Mar Derby on Sept. 6, paid $6, $3.20 and $2.80. Om returned $3.40 and $3, while Royal Albert Hall paid $4.20 to show.
Sunday’s attendance totaled 13,974.
KENT DESORMEAUX (Prospect Park, winner) – “Finally, this horse did what we knew he could do. We’ve been so high on him, right from the first time I got on him. We knew he was special. But he’s had so many things go wrong. He’s had trouble in his races, he’s gotten sick, he’s had issues – it goes on. But today he did it. We wanted to get him out and running earlier. He’s such a big horse we figured it would be better to get him out earlier, let him get to running rather than waiting and saving for that last eighth. He’s a good one. As good as American Pharoah – maybe. I think he is.”
FERNANDO PEREZ (Om, second) – “He ran well. He’s a good horse. I think he needed the race, too. I think he’ll be better for it. The winner is a nice horse, no doubt. But my colt is a good one, too.”
FLAVIEN PRAT (Royal Albert Hall, third) – “I had a good trip and he gave it a good try. He’s a consistent horse. He brings it every time.”
CLIFF SISE (Prospect Park, winner) – “His (speed figure) numbers stood over the field and some of the reports on his turf works were totally wrong. We worked him once on the turf and he went great. Kent (Desormeaux) said he worked just as well on the turf as he did on the dirt. He’ll stay on the turf for the Del Mar Derby. He could go back on dirt for the Super Derby.”
FRACTIONS:  :23.85  :48.44  1:12.77  1:35.68  1:41.54
The stakes win was the second of the meet for rider Desormeaux and his second in the La Jolla (Blacksburg 1992). He now has 70 stakes wins at Del Mar, ninth best among all riders.
The stakes win was the first of the meet for trainer Sise and his first in the La Jolla. It is also his first graded stakes win at Del Mar. He now has eight stakes victories locally.
Prospect Park is owned and was bred by Pam and Martin Wygod of Rancho Santa Fe, CA. Mr. Wygod is a member of the board of directors of the Del Mar Thoroughbred Club.