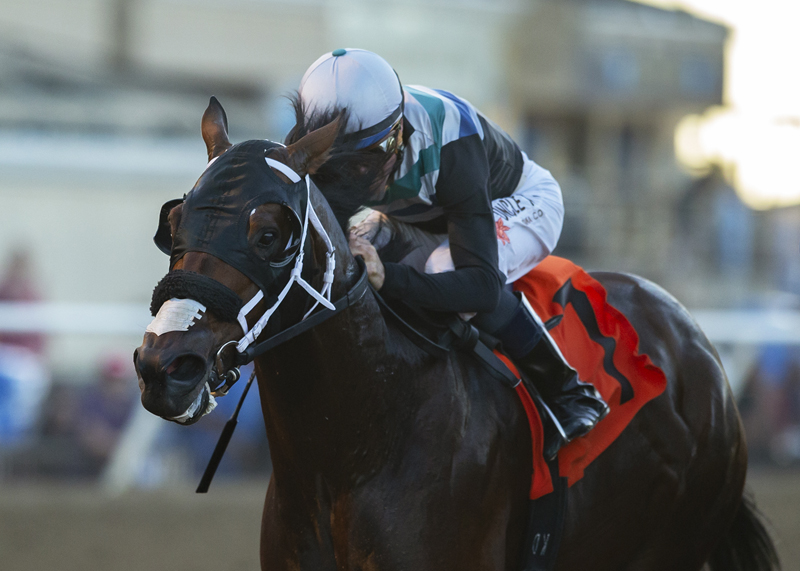 Mia Familia Racing Stable’s Principe Carlo, the longest price in the field at better than 18-1, came widest but strongest of all at the finish to win by the proverbial whisker at the conclusion of the $100,500 Cary Grant Stakes for California-breds Sunday at Del Mar.

The 5-year-old horse by Coil, claimed for only $20,000 in October 2020 and given a year off, gave owner/trainer Librado Barocio his first stakes victory ever and lit up the tote board with a $39.00 mutuel. Old pro Kent Desormeaux took the overland with the horse and got him up for the Hall of Famer’s 85th stakes victory at the seaside oval. Final time for the seven-furlong heat was 1:22.33.

Barocio is the sole owner under the Mia Familia Racing Stable banner.

The track’s Pick Six single ticket jackpot wager once more proved too tough to handle for the punters and its carryover grew to $418,673. With four days left in the meet, there’s the possibility that the bet could carry all the way to next Sunday’s closing day when there would be a mandatory payout.

KENT DESORMEAUX (Principe Carlo winner) – “I knew I’d won it. (Up by a nose in the last jump.) No special instructions for me. Just ride him. The track has been playing better on the outside today so I broke from the 7 and stayed out there the whole race. The horse ran great. He got it done.”

LIBRADO BAROCIO (Principe Carlo, winner) – “My first stakes win anywhere. The horse has a heart of gold and it has been a team effort. We gave him some time off (a year after claiming from Keith Desormeauux in October of 2020) and that’s all he needed. This means a lot. All I needed was a chance and people here and at Santa Anita have been very good in giving it to me.”

The stakes win was the first of the meet for rider Desormeaux and his first in the Cary Grant. He now has 85 stakes wins at Del Mar, ninth most all time.

The stakes win was the first one ever for trainer Barocio.

The winning owner is Mia Familia Racing Stable, which is the nom du course for Librado Barocio of Culver City, CA.