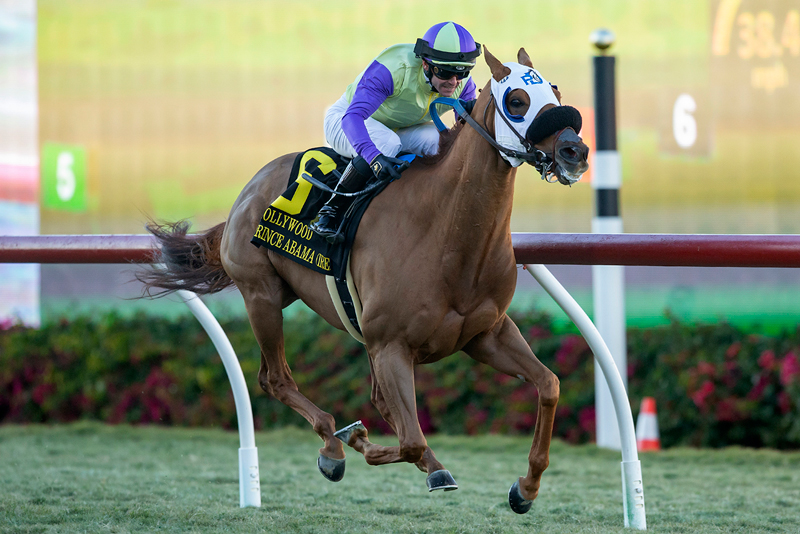 Michael House’s Prince Abama stalked the leader for the first portion of the 12-furlong Hollywood Turf Cup at Del Mar Friday, took over the lead at the mile marker, then simply outran his six rivals in the Grade II headliner to report home a three-quarter length winner.

He was ridden by Flavien Prat, who was tallying his fourth winner of the afternoon. The chestnut is trained by Phil D’Amato, who was capturing the marathon for the second year in a row. He took it last year with the 6-year-old Say the Word.

In the track’s popular Pick Six Single Ticket Jackpot wager, nobody could identify all six winners for the eighth day in a row. That means that the carryover will amount to $295,929 when the bet becomes available on Saturday’s nine-race card, which has a first post of 12:30 p.m.

FLAVIEN PRAT (Prince Abama, winner) – “We (he and trainer Phil D’Amato) that he was tactical enough that I could put him right in the race. It turned out true. He ran well and finished up like we hoped. In these long races you need a horse that can handle the distance. Our horse could today.”

PHIL D’AMATO (Prince Abama, winner) – “Flavien (ride Prat) made the right move at the right time. He sensed that the pace was ultra slow when that three horse was on the lead. He decided at the 5/8’s pole, he wanted to be on the lead and that was the winning move. He (Prince Abama) has just matured and got better.”

The stakes win was the second of the meet for rider Prat, but his first in the Hollywood Turf Cup. He now has 82 stakes wins at Del Mar, 10th most all time among all riders.

The stakes win the first of the meet for trainer D’Amato, but his second (Say the Word, 2021) in the Hollywood Turf Cup. He now has 42 stakes wins at Del Mar.