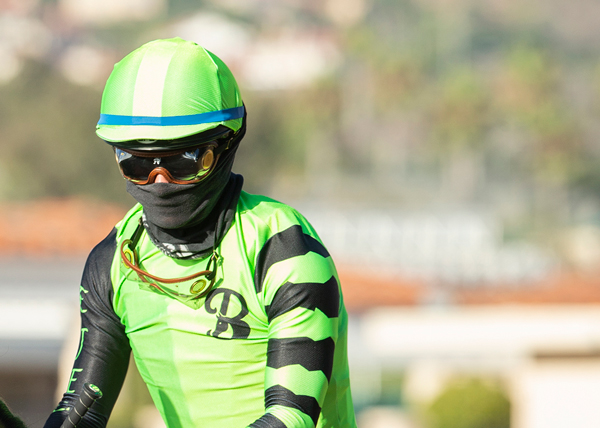 A victory aboard Dr. Schivel in the Grade I, $250,000 Runhappy Del Mar Futurity was the decider as Flavien Prat overcame the unwavering challenge of newcomer Umberto Rispoli to win the riding title of the 81st Del Mar summer season.

Prat won twice on an 11-race closing day program Monday while Rispoli was blanked. A victory in the seventh race, on Joe L. Turner’s Table for Ten for trainer Phil D’Amato, forged a 49-49 tie atop the standings.

The 1 ¾-length score in the Futurity, the traditional closing day feature and penultimate race of the meet, secured a title defense for Prat and his fourth championship, solo or shared, in the past five years. The Futurity was the 15th stakes victory of the meeting for the 28-year-old native of France, a single-season record for a jockey.

The race between Prat and Rispoli, a 32-year-old native of Italy in his debut season at Del Mar, had drama like the final minutes of a tense NBA playoff or NCAA tournament basketball game. There were four ties and seven lead changes from the second weekend of the meeting through closing day. Three of the lead changes came on the last three days of a four-day, Labor Day weekend to end the meet.

On Saturday, Prat won four while Rispoli was blanked to take a 46-45 advantage in wins. But Rispoli responded the next day with four wins to Prat’s two to take a 49-48 lead into the final day.

Rispoli had incredible success on the Jimmy Durante Turf Course, winning 35 of 115 races on the surface, a 30 percent victory rate. Over one weekend in the middle of the meeting he went 7-for-14 in turf events.

Miller, a resident of nearby Encinitas, notched his fourth summer meeting title, equaling the number of fall championships he has logged in the six years Del Mar has been a venue for that session.

Miller saddled 28 winners from 116 starters, an eight-win margin over Phil D’Amato and 13 over third-place Bob Baffert.

Miller and Hall of Famer Bob Baffert tied for most stakes wins with six each. One of them was the third stakes dead heat in Del Mar history when Miller’s Proud Emma and Baffert’s Message couldn’t be separated at the wire in the Tranquility Lake Stakes.

Miller went wire-to-wire for the meeting. He saddled four winners on the opening weekend to get a lead by two and it was only threatened briefly.  D’Amato put together back-to-back two-win days on August 14-15 to move within one, 15-14, of the top of the leaderboard.

But Miller padded the lead with three-win days on August 23 and August 28 and maintained a comfortable margin through the final seven days of racing.