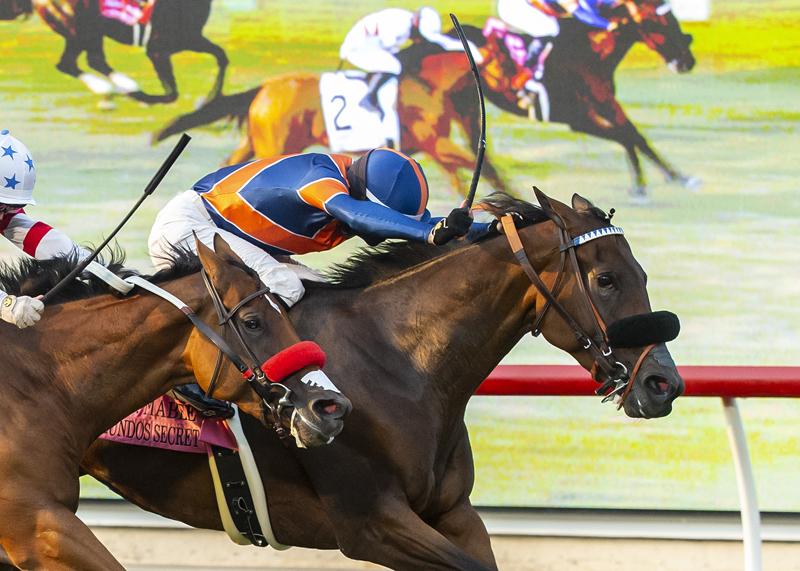 Rider Flavien Prat rang the bell four times Saturday afternoon at Del Mar, the last time in the $150,000 John C. Mabee Stakes. In doing so, the 28-year-old Frenchman tied the Del Mar record for most stakes wins registered in a season by a jockey and forged ahead in his see-saw race for the 2020 riding title with Umberto Rispoli.

Prat’s winning ride in the Grade II Mabee came aboard Sierra Racing or Sterling Stables’ Raymundos Secret, who went wire-to-wire in the nine-furlong turf test to just hold off Rispoli aboard McClanahan, Iavarone or Parkland Thoroughbreds’ Lady Prancealot by a neck. Finishing third in the 63rd edition of the filly/mare stakes was Amerman Racing’s Catch the Eye.

Prat’s four-win day gave him 46 for the summer session in 25 days of racing. Rispoli, who was blanked on the afternoon, has 45.

Raymundos Secret is a 4-year-old filly by the British sire Treasure Beach who now has won five of her seven lifetime starts. This was her initial Graded stakes score. The $90,000 winner’s share of the purse pushed her bankroll up to $188,971.

In the day’s Pick Six, a solo ticket took down the prize of $57,340.  The bettor played through the Amtote Maryland hub and invested a total of $6,454 in tickets.

Racing resumes at Del Mar tomorrow with an 11-race card and a 1 p.m. first post.

FLAVIEN PRAT (Raymundos Secret, winner) – “The plan wasn’t necessarily to go to the front; just to break her out of there and see what happens. She broke super sharp and we were on the lead. From there I just tried to get her to relax and to slow it down as best as I could. Then when we went for home, she gave me a good kick. She just had enough at the end.”

(On tying the jockey record of 13 stakes in a season.)

“It’s a good accomplishment. I’m glad for it. I’m hoping I’ve got one or two more before we’re done here, too.”

The stakes win was the 13th of the meeting for rider Prat, tying him with Rafael Bejarano (2012) for most stakes wins by a rider in one season at Del Mar. It was his fourth victory in the Mabee, including the last two. He now has 57 stakes wins at Del Mar.

The stakes win was the second of the meet for trainer D’Amato, but his first in the Mabee. He now has 28 stakes wins at Del Mar.