Pinehurst Goes Wire to Wire in Futuriy; Mackinnon is Best in Juvenile Turf as Del Mar's Meet Comes to a Close 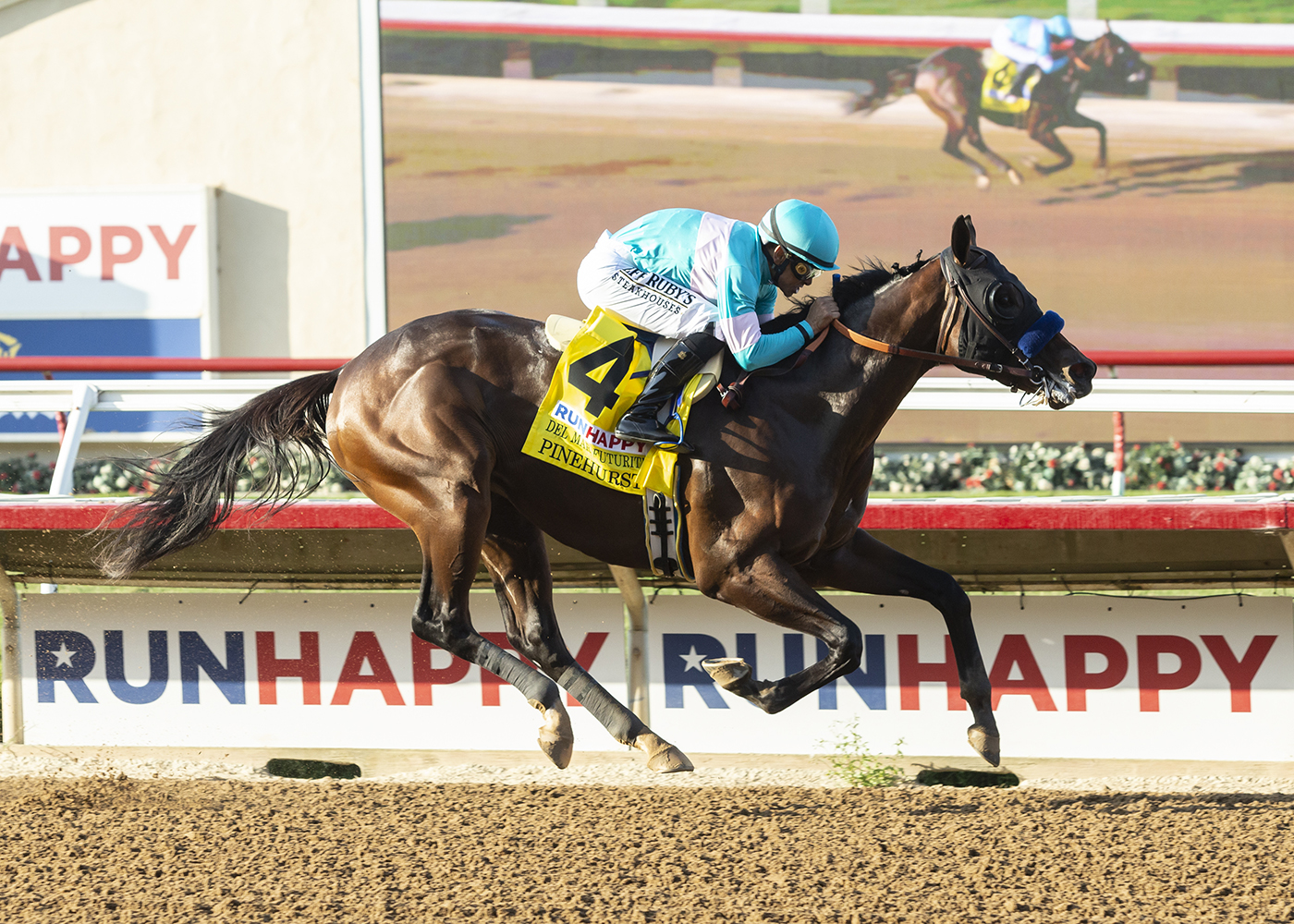 Starlight Racing, SF Racing, Madaket Stables and partners’ Pinehurst scooted to the front in the seven-furlong Runhappy Del Mar Futurity Monday, then just kept on scooting all the way around to score a handy four and a half-length triumph in the 74th edition of the seaside track’s Grade I, $300,000 2-year-old championship race.

It was closing afternoon for Del Mar’s 82nd summer season and it ended as many have over the past 25 years, with trainer Bob Baffert saddling the winner of the Futurity. This time was No. 15 for the Hall of Fame conditioner who has shown an affinity with young horses that few other trainers can even think of.

Finishing second was Lovingier, Fasihuddin or Navarro’s Finneus, who had a half length on Downstream Racing’s American Xperiment.

Earlier in the card, ERJ Racing and Kenney’s Mackinnon outran eight rivals in the $102,000 Del Mar Juvenile Turf, finishing the mile on the grass in 1:36.24.

The winner was handled by Juan Hernandez and is trained by Doug O”Neill.

Racing will resume at Del Mar on Wednesday, November 3.  The track will host its second Breeders’ Cup Championship on November 5 and 6.

MIKE SMITH (Pinehurst, winner) – “When we ran last time, he stumbled pretty badly coming out of there, but he still made the lead. So I knew he was plenty quick. We beat a horse that day (August 1) named Enbarr and I knew they were real high on him. So I figured I was sitting on a good horse. When you ride for Bob (trainer Baffert), you ride with confidence. He puts so much foundation under them and they all come running. So glad I got to win a stakes at Del Mar; and best to do it with a Grade I.”

BOB BAFFERT (Pinehurst, winner) “I could see that (3/5 favorite) Murray didn’t have it today. He was struggling early on. I’m just glad that I had two good horses and one of them had it even if the other one didn’t. I’ve been blessed over the years with so many good owners and so many good young horses. Mike Smith broke his maiden, so it was natural to have him back. He’s a great rider and you give him a live one he knows what to do.”

The stakes win was the first of the meet for rider Smith and his first in the Runhappy Del Mar Futurity. He now has 73 stakes wins at Del Mar, 10th most of all time.

The stakes win was the fourth of the meet for trainer Baffert, but his 15th in the Runhappy Del Mar Futurity. He now has 143 stakes wins at Del Mat, the most of any trainer.