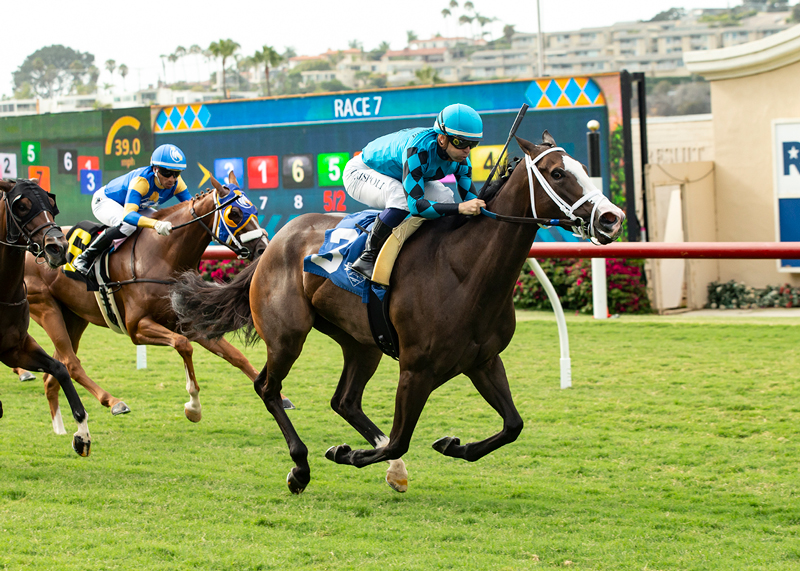 Rockingham Ranch’s Pammy’s Ready, a homebred 3-year-old filly by the veteran Kentucky stallion More Than Ready, tracked a pair of early leaders to the top of the stretch in a five-furlong dash, then shifted outside the pair and went on by to come home with a length and a quarter score in the $83,500 allowance feature that headed Del Mar’s Thursday racing card.

The bald-faced bay was registering the second victory of her career in her 10th start – she also has two seconds and two thirds -- and picked up a first prize of $49,200 for her efforts under top turf rider Umberto Rispoli. She moved her career earnings mark up to $151,052.

The winner had to withstand a claim of foul by the runner-up, Barber or Wachtel Stable’s Woodbine Way. The stewards said ‘no’ to the issue – a tight squeeze on the turn -- in fairly rapid order. Finishing third another half length back was California Racing Partners, Ciaglia Racing or Pearson’s Baby Steps.

For the eighth day in a row the track’s Pick Six Single Ticket Jackpot wager was too tough to handle for the fans far and wide and it once again carried over. The pot has now built up to $539,551, which will be available to players for Friday’s eight-race program.