Outriders: The Horsemen's Horsemen at the Racetrack 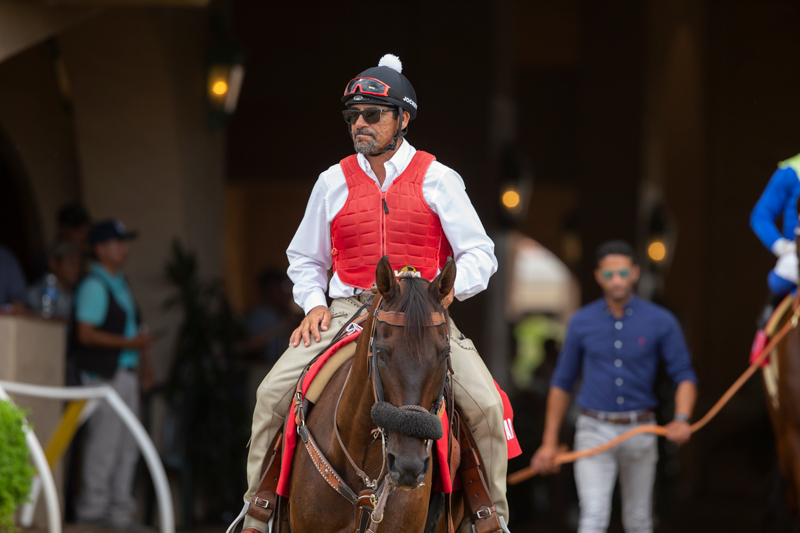 Outrider. Interesting word. Has a cowboy sort of feel to it – and you’d be right to think in that context. One of the dictionary definitions says: “A mounted official who escorts racehorses to the starting post.” That’s correct also. Some think of them as safety riders. Yup, you could say that, too. The safety of horses (and jockeys) is a big part of their agenda.

Del Mar employs 13 outriders, though they normally use only nine of them -- five in the mornings for workouts (four on the main track, one on the training track) and four in the afternoons for the races. You can spot them wearing their red Kevlar vests as a standard part of their uniforms. In the afternoons, they’re also required to wear white shirts, khaki pants, black helmets and have red saddle cloths on their “ponies.” (Their mounts are referred to as ponies, but in fact they are almost all retired Thoroughbreds with some employing retired Quarter horses.)

They are the ones who are the first into action when a racehorse loses his/her rider/jockey on the racetrack. They go to/after the loose horse, which, in its flight, is a huge danger to other horses, to people and, perhaps most of all, to themselves.

If you’ve spent any time at the races, you’ve seen an outrider go lickety-split toward a racehorse who, for whatever reason, has lost his/her rider and is running loose on the track. The outrider and his horse immediately go to max speed to catch up to the panicked animal, who is almost assuredly running somewhere between 30 to 40 miles an hour with no idea where it is going. Then – in a daring maneuver that would cause a real cowboy to nod his head in approval – they go just about side saddle to reach way down and grab the dangling reins and bring the loose horse to a slow and steady stop. It is a stirring sight to see and a demonstration of horsemanship at its very best.

Among its crew of outriders, Del Mar has two stars in a pair of old pros named Jesus Camacho and Jesus Calvillo. You’ll see them in the paddock prior to each race leading the racehorses out and down the tunnel to the track for their pre-race warmups. 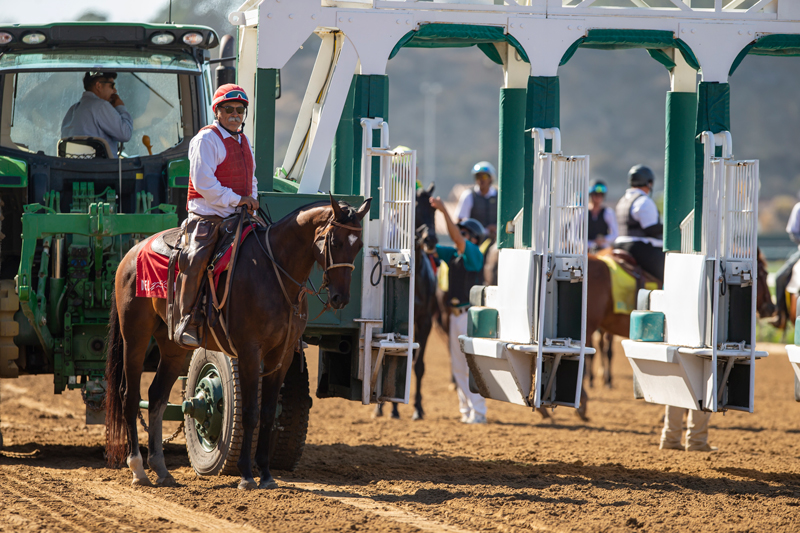 Both are natives of Mexico, both grew up with horses all around them, both immigrated to the U.S. to work with horses. Both are good family men, married with children and, of course, both are terrific horsemen.

“I grew up on what basically was a Quarter horse farm,” remembers Camacho. “My grandfather was a Quarter horse jockey. My father was a Thoroughbred jockey both in Mexico and the U.S. I’ve got a brother who was a jockey. Horses were my life early on. I remember being on horses at the age of two or three. I remember once when I was five I galloped a horse on our farm and he started going really fast. I loved the feeling. But my grandfather told me ‘No, he’s going to run off with you and you’re going to get hurt.’ So I had to slow down and be more careful.”

Chewy says he recalls being on horses when he was just one. He adds that he rode a horse to school. There were lots of horses around his home, and lots of family, too. He has nine brothers and eight sisters. He brags that his mother was the best horse person in the family.

“Lots of horse, lots of family in my life,” Chewy says. “My Mom is 88 now and she still rides. She taught us all to ride. I rode in match races. When I was 13 I rode in Quarter horse match races all the time. Horses were a big part of growing up.”

In the past decade, both shifted to their new roles as outriders.

“I love the job,” Camacho says. “It’s important. I love the role as the lead; I want to do my best every day, every race. Whether it’s a race for $10,000 horses or for a million bucks, it’s all equally important. When I have to run down a loose horse and I’m able to get him under control, it makes me very happy. You can see it in the eyes (of the loose horse); they were afraid and now when you catch them they feel safe. It’s one of the best parts of my job.”

Chewy likes his work too, of course. For years he not only was an exercise rider for Dominguez, but also “broke” his 2-year-olds, in other words he taught them to accept saddle and rider and be prepared for their roles as racehorses. Now, as an outrider, he gets to see the results.

“One of the favorite parts of my job as an outrider,” he notes “is seeing the 2-year-old horses transform into mature racehorses. It is so rewarding.” 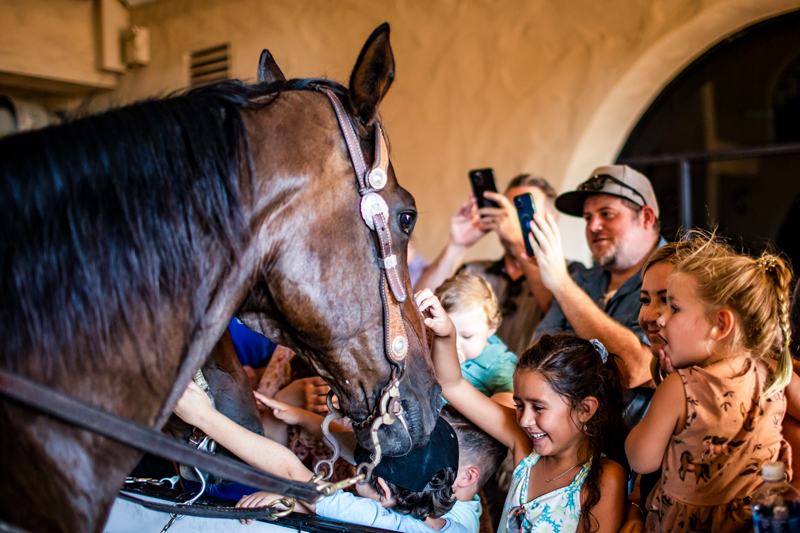 Del Mar’s outriders have another role that they were never asked to do, but just naturally gravitated to it: Becoming some of the racetrack’s best PR men by using contact with their horses to bring joy to racing fans, especially little kids.

You’ll see them in the tunnel between races with their horses’ heads and necks dipping into the crowds for lots of pets and oohs and aahs. Getting up close and personal with a big, ol’ horse is a special happening in this day and age.

“I think that might be my favorite part of it all,” says Camacho. “When you see the eyes on the little kids light up, that’s just the best. I love Sundays here. That’s the day when lots of families come out and bring their kids. They love to touch our horses.”

Outriders. They’re many things. And they’re all good.