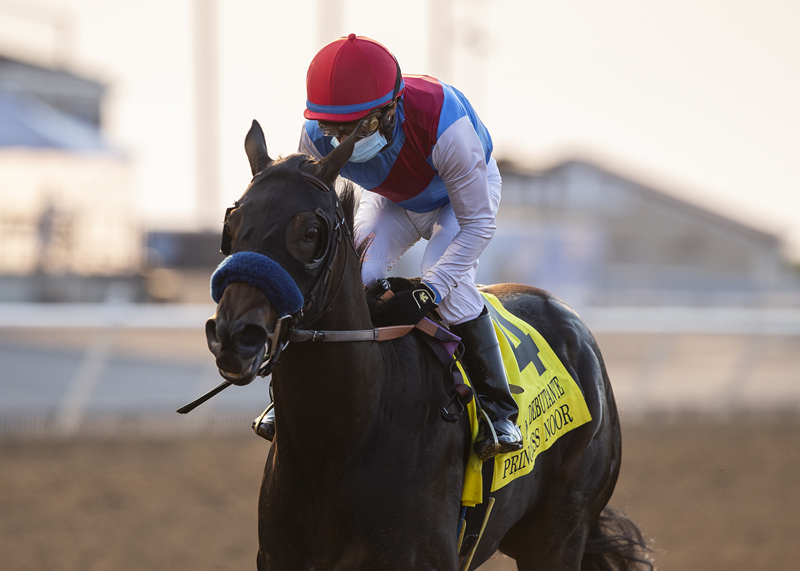 Zedan Racing Stable’s high-priced filly ran like she was worth every penny of the $1.35 million owner Amir Zedan spent on her this past April at a 2-year-old in training sale and took down honors in the Grade I Del Mar Debutante Sunday afternoon at Del Mar.

The well-made daughter of the Giant’s Causeway stallion Not This Time overcame some jostling at the start, then took command at the head of the lane to draw out to a six and one-half length tally in the 70th edition of the local championship race for 2-year-old fillies. As the 7-10 favorite in the field of six, she returned $3.40, $2.40 and $2.10 across the board.

Hall of Famer Victor Espinoza handled the filly for Hall of Fame trainer Bob Baffert. Espinoza had been aboard her here on August 22 when she easily took her debut in a straight maiden race.

Finishing second in the seven panel spin was Phoenix Thoroughbreds’ Forest Caraway and third was Bolton, Leidel or Lipman, et al’s Illumination. The second choice in the race, Erich G. Brehm’s My Girl Red, who was involved in a bit of bumping with the winner away from the gate, appeared to take a bad step less than a furlong into the race and was pulled up by her rider. She was returned to her barn and reported to be fine.

Princess Noor ran the distance in 1:23.15, though she was under a stout hold for the last sixteenth of a mile.

The Debutante win was the fifth for rider Espinoza and ninth for trainer Baffert.

VICTOR ESPINOZA (Princess Noor, winner) – “Yes, she’s a little green. Only her second time (to race). Coming away from there she went in a bit and I tried to get her off as quickly as I could. You try to control the babies as best as you can, especially at the break. The other filly (My Girl Red) came out on me. My filly was OK from there. I really don’t know how good she is, because I haven’t let her run yet. It’s nice to be back at Del Mar and riding good horses.”

BOB BAFFERT, by phone from Kentucky, (Princess Noor, winner) – “We knew going in she was a special filly. She showed so much brilliance at the sale, that’s why she cost so much, and we got what we expected to see today. She broke a little off kilter and was behind horses, but Victor didn’t really push her, especially at the end. We’re happy to get the win. We’ll run her back at Santa Anita and then go from there.”

The stakes win was the first of the meet for rider Espinoza and his fifth in the Debutante. He now has 103 stakes wins at Del Mar, third most among all riders.

The stakes win was the sixth of the meet for trainer Baffert and his ninth in the Debutante. He now has 139 stakes wins at the track, the most by any trainer.