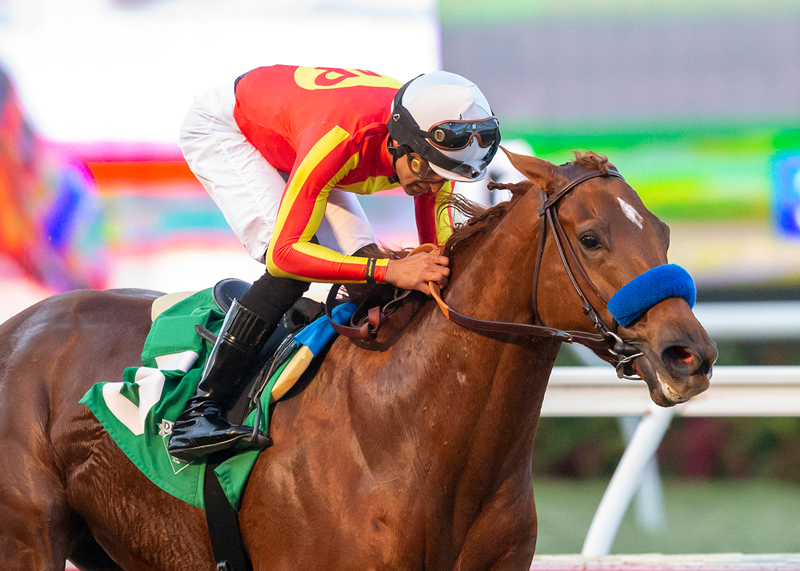 Pegram, Watson and Weitman’s Defunded overcame a slow start to move into contention early, then drew well clear at the top of the stretch and cruised home in winning Sunday’s $150,500 Native Diver Stakes at Del Mar.

The 4-year-old chestnut gelding finished up four and three-quarter lengths to the good under Edwin Maldonado and returned $3.40 for the win as the 7-10 favorite in the field of six. He ran the nine furlongs on the main track in 1:50.12 and picked up a first prize of $90,000 to increase his earnings mark to $608,100.

Defunded, a Kentucky-bred by the stallion Dialed In, is trained by Hall of Famer Bob Baffert, who was winning his third Native Diver. It was also the conditioner’s 155 stakes victory at the seaside oval, which puts him a remarkable 70 wins ahead of his next closest competitor in the all-time training ranks at the shore.

Finishing second in the test for older horses was Pegram, Watson and Weitman’s Azul Coast, who had three-quarters of a length on Bernsen, Little Red Feather Racing and Rockingham Ranch’s Newgrange.

In the track’s popular Pick Six Single Ticket Jackpot wager there was yet another carryover, this one amounting to $398,402. That amount will be in the kitty when the bet becomes available again when racing returns on Friday, December 2. First post that afternoon for a nine-race card will be 12:30 p.m.

EDWIN MALDONADO (Defunded, winner) – “He came away from their a little bit slow, but I wasn’t concerned. This horse doesn’t need to be in front. He’s won from off the pace before. I rode him with confidence all the way. On the turn he wanted to lean on the horse inside us, but I got him going straight and it all worked out from there.”

JIMMY BARNES (Defunded, winner) –  “Edwin (Maldonado) said Defunded was kind of wanting to sit back and when that happens and they sit back when the gate opens then you’re going the wrong way. Luckily they were going slow enough he was able to recover and get back in a good position. He’s always had talent. It’s just that he’s been a little aggressive in the paddock on us at times. But he went through the paddock good, he went to the gate good so maybe we’ve got him straightened out.”

The stakes win was the first of the meet for rider Maldonado and his first in the Native Diver. He now has 10 stakes wins at Del Mar.

The stakes win was the third of the meet for trainer Baffert and his third in the Native Diver. He now has 155 stakes wins at Del Mar, far and away the most of any trainer.