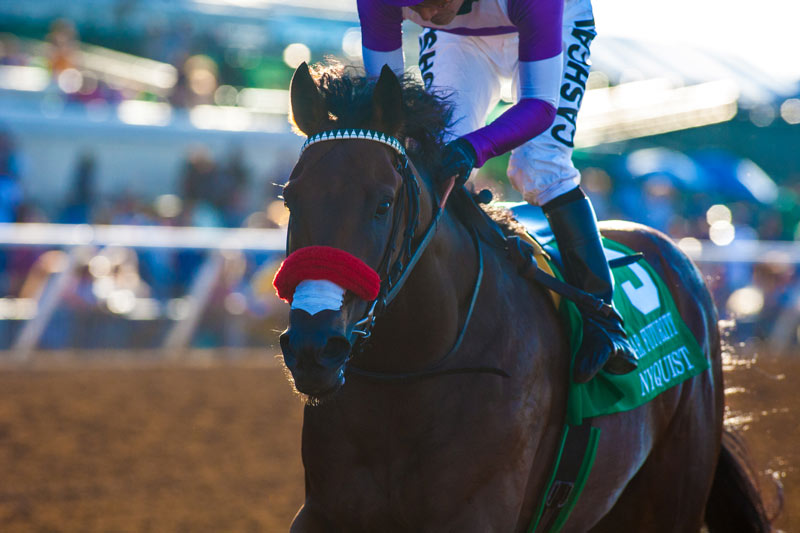 J.Paul Reddam’s unbeaten Nyquist, the 1-2 favorite piloted by Mario Gutierrez, projected himself into the national picture as a force among two-year-old males this year with a brilliant victory in Monday’s Grade I $300,000 Del Mar Futurity, closing-day headliner of the 2015 summer season.
Nyquist, a son of Uncle Mo, surged to the lead in the upper stretch, drew out and never was threatened in winning by three and three-quarter lengths in 1:23.28 for the seven furlongs. It was his third victory in as many starts and his second stakes success this summer, having won the Best Pal Stakes a month ago.
The Del Mar Futurity is the event American Pharoah used as a springboard a year ago to his successful career culminating in an historic sweep of the 2015 Triple Crown.
Swipe, second to Nyquist in the Best Pal, finished second again, rallying well under Kent Desormeaux to be four and one-quarter lengths clear of third-place Blameitonthelaw in the field of six juveniles. Withdrawn from the original line-up were Mt Veeder and Nightly News.
Nyquist, a $400,000 purchase at the Fasig Tipton two-year-olds-in-training sale last March, returned $3, $2.20 and $2.10 while earning a prize of $180,000 to increase his career bankroll to $333,600. Swipe paid $4.40 and $2.60, while Blameitonthelaw returned $2.40 to show.
Nyquist climaxed a memorable afternoon of racing for Reddam and trainer Doug O’Neill.
Earlier in the day, at Saratoga race course in New York, Reddam-owned and O’Neill-trained Ralis won the Grade I Hopeful Stakes under jockey Javier Castellano. Nyquist also provided Reddam with his 13th victory either as a sole owner or in partnership this Del Mar season. O’Neill also trained the winner of Monday’s sixth race, Where’s The D, a $71 winner owned in partnership by Reddam with ERJ racing.
O’Neill made it three winners for the afternoon in the $100,000 Oak Tree Juvenile Fillies Turf with an upset by English-bred Jakaby Jade piloted by Flavien Prat. Making her American debut after two starts in England, Jakaby Jade won by one and one-half lengths over One Last Shot, with the Reddam-owned and O’Neill-trained Gomo, the 3-1 second choice, finishing third.
Jakaby Jade, owned by Keh and Slam Dunk Racing, ran the mile on turf in 1:37.63 and paid $16.80, $7.40 and $5.40. The daughter of Royal Applause earned $60,000 with her second win to push her bankroll to $64,715. One Last Shot returned $5.40 and $4.20, while Gomo paid $3 to show.
In an early supporting feature on the closing day program, hard-knocking veteran sprinter Big Macher demonstrated his class as he rallied to win the $102,250 Pirate’s Bounty Stakes under jockey Rafael Bejarano.
Overcoming a slow start, Big Macher, winner of the 2014 Bing Crosby Stakes, circled his rivals on the stretch turn and went on to win by four and three-quarter lengths in 1:09.18 for the six furlongs. Cherubim was second and Athens third in the field of ten speedsters.
Big Macher, owned by Tom Mansor and Tachycardia Stables and trained by Richard Baltas, went postward the 11-10 favorite and returned $4.20. It was the seventh win in 17 starts for the son of Beau Genius. First prize of $66,360 increased the gelding’s earnings to $684,038, all for his owners who claimed him for $20,000 from his career debut at Del Mar in July of 2013.
With a carryover of $142,691 from Sunday and $1,033,358 bet Monday, the Pick Six pool totaled $1,176,049. There was a single perfect ticket and it was worth $694,742.40. The $72 ticket was purchased at the Stockton inter-track wagering site.
Monday’s Labor Day holiday attendance was 10,446.