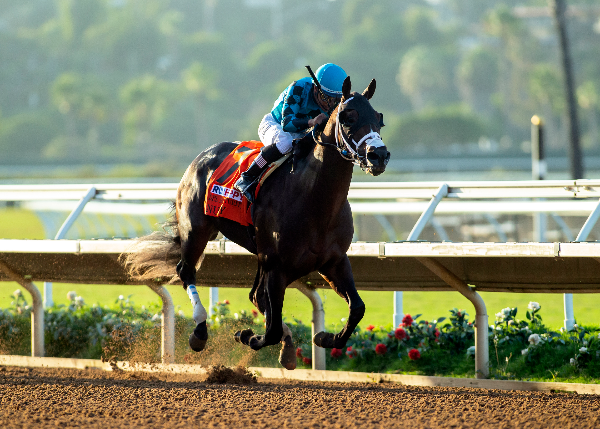 In an eventful renewal of the Grade I Runhappy $300,000 Del Mar Futurity Monday, 35-1 longshot Nucky scored by two and three-quarter lengths and then survived an inquiry after the seven-furlong sprint which was marred by an accident involving favored Eight Rings and Storm the Court shortly after the start.

The accident occurred when Eight Rings, the 1-2 favorite ridden by Drayden Van Dyke, veered in sharply and bumped Storm the Court, piloted by Flavien Prat, in the first eighth of a mile.  Both jockeys were unseated and their mounts ran off in pursuit of the field.

Prat escaped injury, but Van Dyke was scheduled to undergo a precautionary examination at Scripps Hospital in La Jolla. Both horses were pronounced okay after a veterinary exam.

Nucky, with Norberto Arroyo, Jr., went to the lead in the upper stretch and steadily increased his margin to record a clear triumph. Wrecking Crew was second, a half-length in front of Defense Wins, with Ginobili fourth in the field of eight two-year-olds.

Richard Baltas, trainer of fourth-place Ginobili, lodged an objection against the winner, alleging interference in upper stretch. However, the Del Mar stewards, after viewing videotape, disallowed the claim.

NORBERTO ARROYO, JR. (Nucky, winner) – “What a way to end the meet. I don’t deserve this. But somebody wanted me to have it. I thank the Lord up above. My aim was to track the 2 horse (favored Eight Rings).  My horse broke good and I was looking for the 2. By the four and a half (furlong pole) I couldn’t see him (the 2) at all and I knew something must have happened. Then I just went to riding my horse. He responded well. I don’t know if he was the best horse in the race to start, but he was the best to finish. He responded well at the end.”

ABEL CEDILLO (Wrecking Crew, second) – “He ran huge. He got a little tired at the end, but he was a runner. Great race for him.”

RAFAEL BEJARANO (Defense Wins, third) – “He’s still a little green. But it was a very good try for him today. When they run farther, he’s going to be better.”

PETER MILLER (Nucky, winner) – “It was obviously unfortunate. You never want to see any horse or rider go down. My first thoughts are with the horses and the riders. I don’t know what happened, but after that, we won clear. I wasn’t worried (about the inquiry). They bumped slightly, but the No. 4 (Ginobili) was tiring. To finish 1-2 in the Del Mar Futurity, for me, I mean it’s just incredible under any circumstances.”

The stakes win was the third of the meet, but first in the Del Mar Futurity for rider Arroyo, Jr. He now has 10 stakes wins at Del Mar

The stakes win was the third of the meet, but first in the Del Mar Futurity for trainer Miller. He now has 27 stakes wins at Del Mar.

The winner is owned by Rockingham Ranch, which is the nom de course for Gary Hartunian of Sherman Oaks, CA.