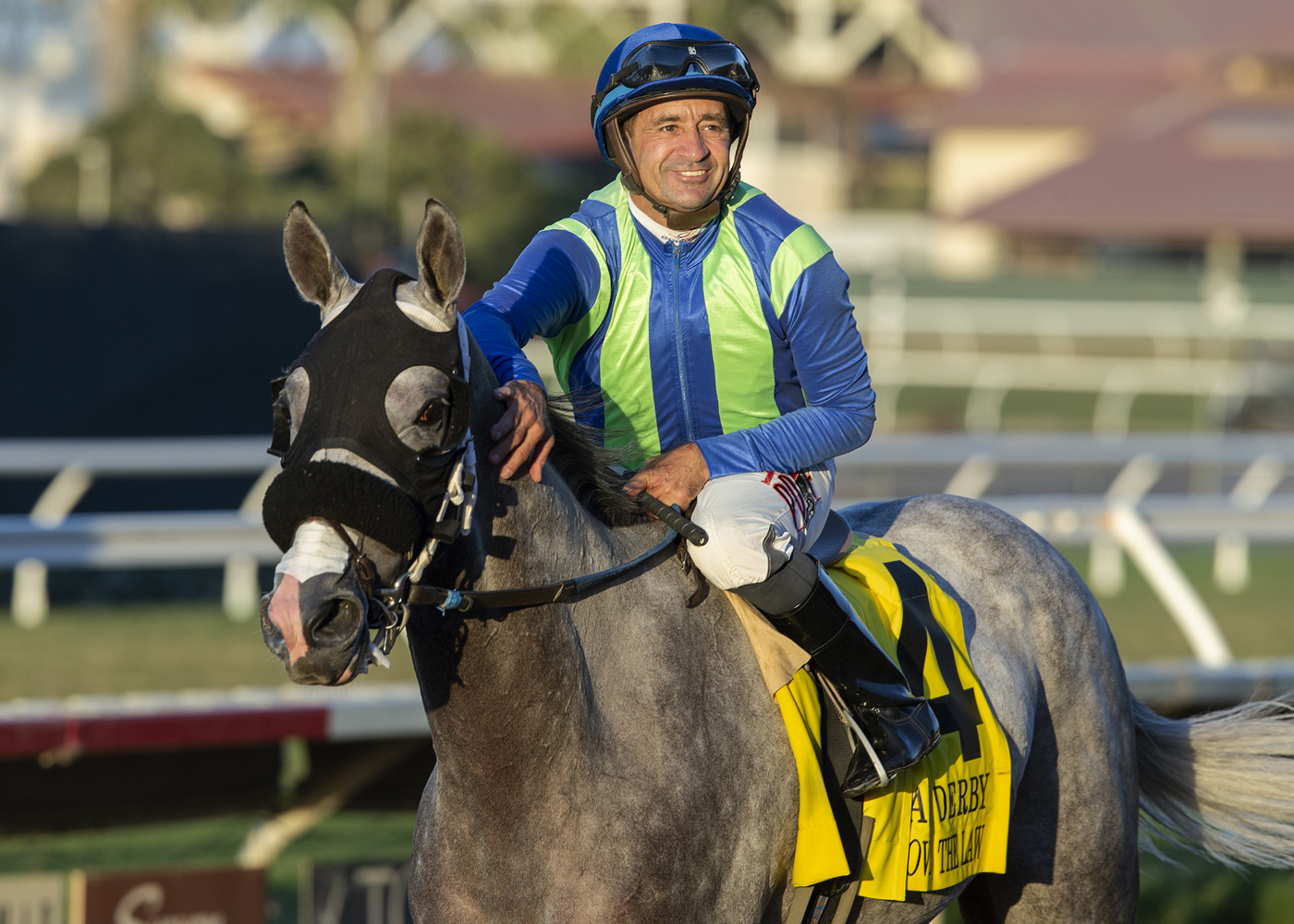 None Above the Law © Benoit Photo

Given a ground-saving ride by veteran Joe Bravo, the gray gelding None Above the Law fired in the lane and came away a winner of the 77th running of the Caesars Sportsbook Del Mar Derby at the seaside course Saturday, proving best by three-quarters of a length in the $254,000, Grade II headliner.

The son of the Japanese stallion Karakontie who was bred in California by his owners, J. Kirk and Judy Robison of El Paso, TX, found running room in the stretch and outfinished 12 rivals late to tally his sixth victory and earn a first prize of $150,000, which pushed his earnings up to $454,060. He is trained by Peter Miller.

Finishing second in the 3-year-old contest on the Jimmy Durante Turf Course was Wachtel Stable, Barber or Drion, et al’s Flashiest, who had a head on Reddam Racing’s Hockey Dad, the race’s pacesetter who hung tough late.

Final time for the nine furlongs out of the angular Del Mar infield chute was 1:48.97.

This was the first stakes win in the Del Mar Derby for both Bravo and Miller. The jockey is riding his first full season at Del Mar. Miller is the current meet’s leading trainer and is en route to winning his eighth conditioning title at the shore oval.

In the track’s Pick Six Single Ticket Jackpot wager, the bet once again could not be hit and its carryover swelled to $556,901. If it is not hit during tomorrow’s 11-race card, it will carry to closing day Monday, which will be a “mandatory” payout afternoon.

JOE BRAVO (None Above the Law, winner) – “Peter (trainer Miller) told me this horse can do anything. He wins running seven eighths on the dirt; he wins going a mile and one-eighth on the grass. We just saved all we could and I showed him daylight turning for home. He really got up under me. I’m having fun riding out here. Riding for good horsemen and riding good horses in Southern California. What more could a guy want?”

PETER MILLER (None Above the Law, winner) “I know he went from a mile on turf (9th, Oceanside Stakes) to seven-furlongs on the dirt (won Real Good Deal) to a mile and an eighth on the turf to win this. You won’t find that in any training manual, that’s not the way you do it. But this horse just does everything well. He’s just an overachiever and I just love this horse. The Robinsons are longtime clients and what a ride by Joe Bravo.”

The stakes win was the fourth of the meet for rider Bravo, but his first in the Caesars Sportsbook Del Mar Derby. He now has six stakes wins at Del Mar.

The stakes win was the fourth of the meet for trainer Miller, but his first in the Caesars Sportsbook Del Mar Derby. He now has 42 stakes wins at Del Mar.

The winning owners are also the breeders, J. Kirk and Judy Robison of El Paso, TX.