Nine Likely for Saturday's Grade I Crosby at Del Mar 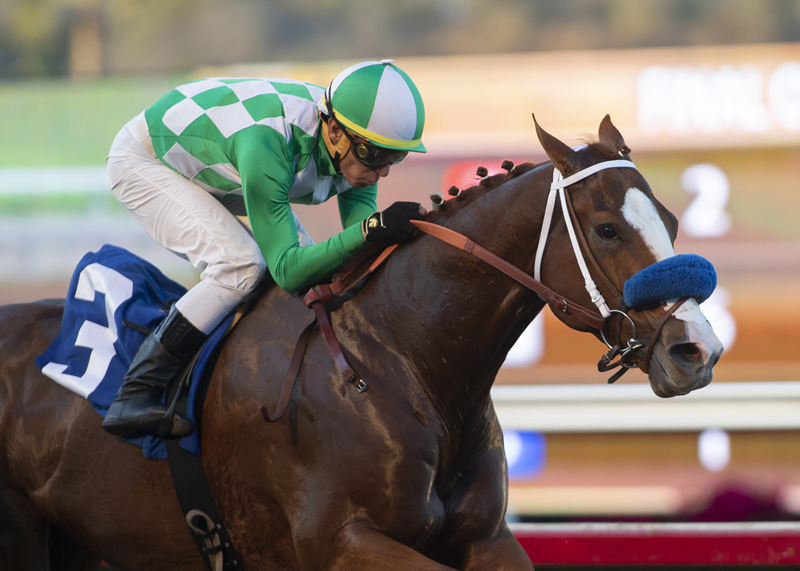 The Grade I Bing Crosby, a $250,000 test for 3-year-olds and up at six furlongs, appears likely to have nine starters Saturday when the venerable sprint stakes will be run for the 75th time. Named, obviously, for the track’s celebrity founder, the dash has seen hundreds of top horses vie for it first prize in all the years since its inception in 1946.

It appeared the multi-millionaire McKinzie would head the Crosby field for this go-round, but trainer Bob Baffert has called an audible with his multi-stakes winner and indicated he’d rather run him later in the meet at seven furlongs in the Pat O’Brien Stakes on August 29.

Stepping up to fill the role of favorite in the Crosby is Harris Farms, Antonsen or Nicolett’s Fashionably Fast, a 5-year-old gelding who is just what his name indicates. The son of the late Lucky Pulpit has won six of his last seven starts, each time using his exceptional speed to make or stalk the pace, then proving gamest in the stretch. His last outing – the Grade II Triple Bend Stakes over seven panels at Santa Anita on June 7 – saw him run a sharp second to McKinzie, a horse he won’t have to contend with Saturday.

Tiago Pereira, who has handled the quick chestnut in his last 11 outings, will once more be aboard for trainer Dean Pederson.

Another strong threat in the field is the Twirling Candy colt Collusion Illusion, the lone 3-year-old in the gathering. The Mark Glatt-trained bay won the Best Pal stakes at Del Mar last August, then apparently suffered an injury of some sort in the American Pharoah Stakes at Santa Anita in September that put him on the shelf. He returned to action in May at Santa Anita, winning an allowance race and following that up with a score in the Laz Barrera Stakes in smart style.

Because of his age, Collusion Illusion will get a four-pound weight break, carrying 118 while all his older rivals go with 122. Flavian Prat rides the sophomore colt.

The Crosby is a Breeders’ Cup “Win and You’re In” Challenge Race, meaning its winner gets an automatic entry into the 2020 Breeders’ Cup Sprint and has his pre-entry and entry fees for the race waived. This year’s Breeders’ Cup will be held at Keeneland in Kentucky on November 6 and 7.

Here’s the complete lineup for the Crosby from the rail out with riders and morning line odds:

Desert Law ran second in last year’s Bing Crosby, then dropped off the scene. Trainer Carla Gaines brought the Desert Code gelding back to the races in June at Santa Anita where he finished a close-up third in the Thors Echo Stakes. With that race under his belt, the 5-year-old could be a horse to consider in this year’s Crosby.

The Crosby will go as the 10th of 11 races carded for Saturday.  There will be two other stakes on the program, the $100,000 Shared Belief for 3-year-olds and the $100,000 CTBA Stakes for 2-year-old California-bred or sired fillies.

First post for all days at the summer Del Mar session is 2 p.m.