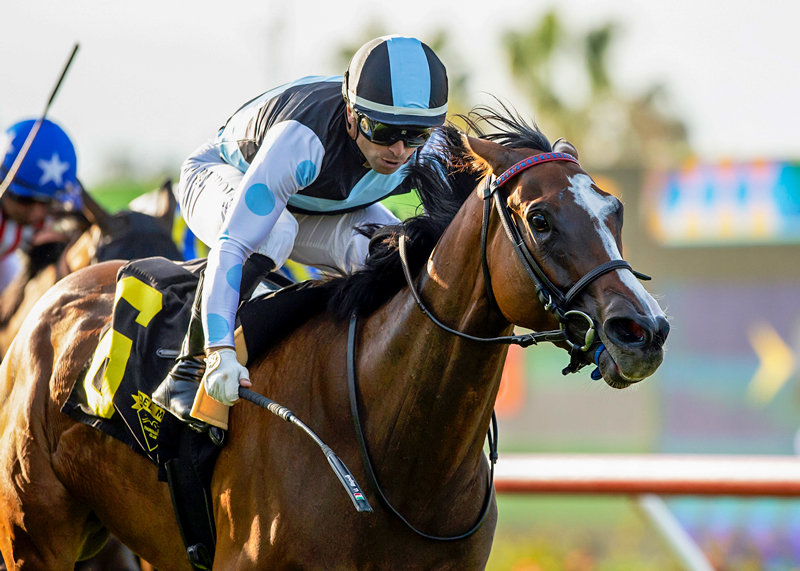 The premium will be on deep breathing and large lungs this Thursday – Thanksgiving Day – when nine distaffers saddle up for a mile and three-eighths tour of the Jimmy Durante Turf Course. Their goal will be to win the $150,000, Grade III Red Carpet Handicap.

The holiday card will have an early beginning – 11 a.m. is the first post – and an early conclusion (approximately 3 p.m.) so folks can get home for some turkey dinner.

The 11-furlong marathon is headed by Eclipse Thoroughbred Partners’ Sister Otoole, a 5-year-old mare who is based in the east with trainer Graham Motion’s string at his Maryland training center, but has history at Del Mar that bodes well for her chances Thursday. The bay Florida-bred by the Irish stallion Amira’s Prince shipped west this past summer and came away a winner in the CTT & TOC Stakes, closing nicely through the stretch to tally by half a length.

She was handled that day by turf specialist Umberto Rispoli and he’ll be in the tack again Thursday.

Bellstreet Bridie is an interesting element in the Red Carpet. The 3-year-old daughter of the English sire Sir Percy is making her U.S. debut in the race for trainer Mark Glatt. Racing in her native country the past two years she’s made a dozen starts and has come away a winner on three occasions. Her ace in the hold Thursday might be the fact that she’s run long on the grass on multiple occasions and should not be intimidated by the distance.

Scarabea ran second to Sister Otoole in the CTT & TOC last summer. She’s a 4-year-old by Triple Crown winner American Pharoah who is another who has run long on the grass on numerous occasions.

Duvet Day won an allowance race at Del Mar in July at the mile and three-eighths distance on the lawn. She’s an Irish bred 3-year-old by the sire Starspangledbanner.