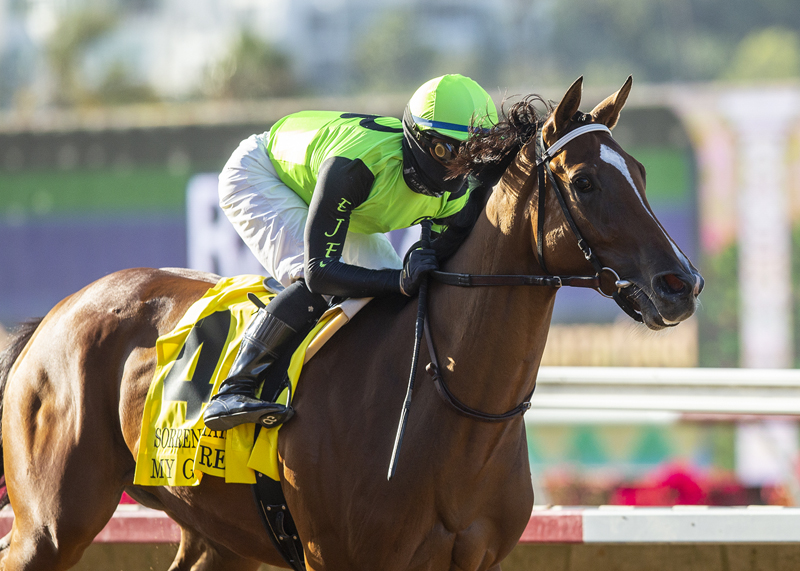 The bay daughter of 2014 Breeders’ Cup Juvenile winner Texas Red – owned in part by Brehm and trained by My Girl Red’s conditioner, J. Keith Desormeaux – covered six furlongs in 1:12.12 in eased-up fashion and picked up a check for $90,000 from the $150,500 total purse.

Flavien Prat, Del Mar’s leading rider with 20 firsts in 11 days of racing, rode My Girl Red for his seventh stakes win of the meet, far and away the most by any jockey at the shore session.

Finishing second was Reddam Racing’s first-time starter Get On the Bus and running third was Tricar Stables’ Exchange Vows.

Desormeaux indicated that his charge would point next for the meet’s top offering for young fillies, the Grade I, $250,000 Del Mar Debutante on Sunday, September 6.

Prat won two races on the afternoon, as did riders Umberto Rispoli and Juan Hernandez.

In the Pick Six, a lone ticket holder had races 4 through 9 tabbed correctly and picked up a score of $181,849 for his/her efforts. The $9,216 winning ticket was sold to a Player Management Group wagering through Xpressbet at their Oregon hub.

Racing resumes at Del Mar Saturday with an 11-race card starting at 2 p.m.

FLAVIEN PRAT (My Girl Red, winner) – “I didn’t have any special instructions; just ride her with confidence. She showed speed away from there, then we got a nice breather on the turn. From there she just went on and won in hand.”

J. KEITH DESORMEAUX (My Girl Red, winner) – “Flavien (Prat) was telling me how she was looking around and kind of lost interest the last eighth (of a mile). What was nice to me was that she was doing that the first quarter. I know it’s still early and the time is average. But I think she can go even quicker and I sure don’t want to complain. She has always shown signs of class and it’s nice to see one duplicate in the afternoon what we see in the mornings. Debutante is next. ($250,000, Grade I Del Mar Debutante at seven furlongs on Sunday, September 6.)”

The stakes win was the seventh of the meet (in 11 days of racing) for rider Prat and his second (2018, Bellafina) in the Sorrento.  He now has 51 stakes wins at Del Mar.

The stakes win was the first of the meet for trainer Desormeaux and his first in the Sorrento. It is his sixth stakes win at Del Mar.

The winning owner is Erich G. Brehm from Sonnyvale, TX. Brehm was part of the partnership that owned My Girl Red’s sire, Texas Red, the winner of the 2014 Breeders’ Cup Juvenile.