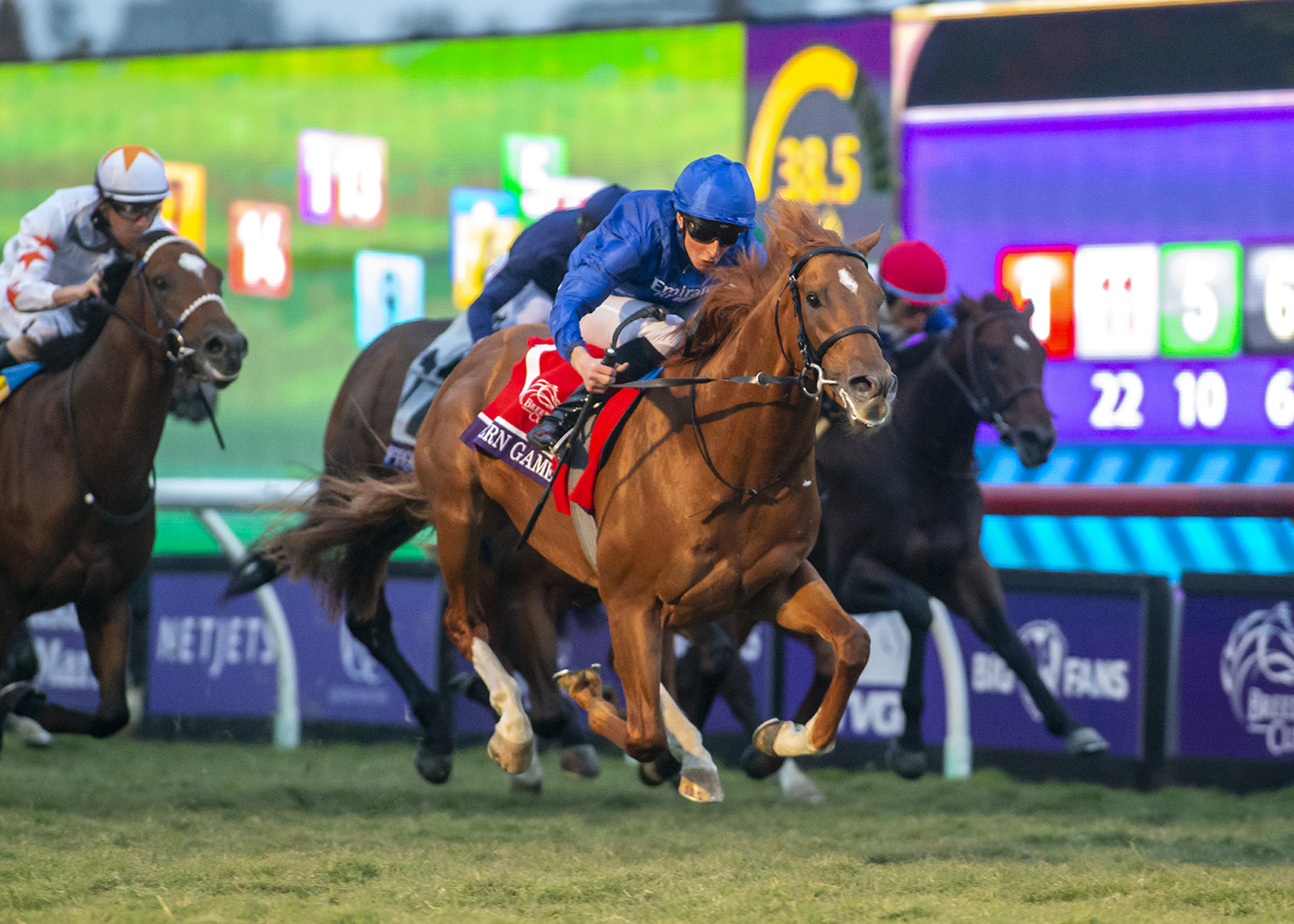 Godolphin’s Modern Games (IRE), running for purse money only following an incident at the starting gate prior to the race, unleashed a blistering turn of foot down the stretch to win the 14th running of the $1 million Breeders’ Cup Juvenile Turf (G1) to wrap up Future Stars Friday for 2-year-olds to kick off the 38th Breeders’ Cup World Championships Friday afternoon at Del Mar.

Trained by Charlie Appleby and ridden by William Buick, Modern Games covered the mile on a firm Jimmy Durante Turf Course in 1:34.72.

Prior to the start of the race, Albahr (GB) flipped in the starting gate and was scratched and Modern Games initially was ruled a scratch but allowed to run for purse money only.

Racing in mid-pack early on, Modern Games was sixth turning into the stretch, angled out six wide and surged to the front at mid-stretch blowing past Grafton Street. Tiz the Bomb rallied from far back under Brian Hernandez Jr. to finish 1 ½ lengths back in second. For pari-mutuel purposes, Tiz the Bomb rewarded his backers with a $17.60 win payoff.

Modern Games is a son of Dubawi (IRE) out of the New Approach (IRE) mare Modern Ideals (GB).

Winning trainer Charlie Appleby (Modern Games) – “I’ve never been in this position. It was very particular situation, but most importantly is Frankie (Dettori) got away all right and Albahr is back at the barn and appears OK. Just superficial cuts. Modern Games pulled it through for us. William (Buick) gave him a great ride. It’s fantastic for the whole team.

“Modern Games was hugely impressive in the race. I’ve been delighted with his work all week. He traveled over very well and taken everything in his stride. I was fairly confident coming in the race but to win like he did was quite special. He’s very exciting for next year. Congratulations to all the team over here and back home and His Highness Sheikh Mohammed.”

Winning jockey William Buick (Modern Games) – “To be honest I didn’t know what happened in the gates. I heard walkie talkies saying they were going scratch me. The gate opened for me by one of the stall handlers so I could get away from Albahr.

“He broke electric the first time (through the gate, prior to the race) and then when they put him back in he was a little bit restless and he broke slow. But because I was in the one-hole, I managed to have a bit of time and get a good position. Then going to the three-eighths pole, I managed to switch out and get running and he really finished for me.

“Modern Games is a real pro. To be able to deal with that situation before a race at this level is very rare. It was a great performance and I’m delighted.”

Trainer Kenny McPeek (second with Tiz the Bomb) – “He ran great. He ran super. He had a little tight trip but other than that, all good.”

Jockey Brian Hernandez Jr. (second with Tiz the Bomb) – “It was a good trip, but not the ideal one. I thought I was going to get. Under the wire, I wound up being further back than I was planning on. But from there on, we never got stopped. On the turn for home, everything opened up and we made a nice closing run. We wish would could have gotten the win for Kenny (McPeek).”

Trainer Doug O’Neill (third with Mackinnon) – “He had a little traffic early, but settled and closed with a great rally. Very proud of him.”

Jockey Juan Hernandez (third with Mackinnon) – “He ran a good race.  He was flying at the end, but the winner was just too much.  He tried hard every time.”

Trainer Mark Casse (fourth with Grafton Street) – “I thought he was the winner for a minute. He’s so powerful but he’s just learning. I’ve been telling them for a while that he’s a pretty serious horse, so hopefully he improves with this. He ran good. I thought going down the backside he was full of horse and then he got a little tired. He ran good.”