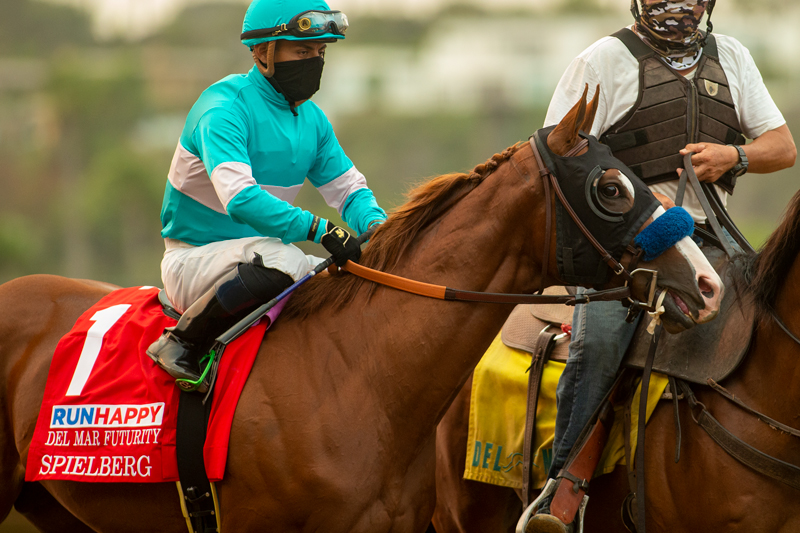 SF Racing, Starlight Racing or Madaket Stables, et al’s Spielberg, a $1-million yearling purchase at last year’s Keeneland September Yearling Sale, takes the next step in his racing career here Sunday as he heads a field of six juveniles in the seventh edition of the Grade III Bob Hope Stakes, a seven-furlong spin that carries a $100,000 purse.

Del Mar’s morning line maker Jon White has hung the chestnut colt as the 6/5 favorite in the extended sprint, a race named for the show business icon who laid the path for his big Hollywood breakout when he became good pals with Bing Crosby during post-race parties at the shore oval in its first season (1937). Crosby and Hope went on to make nine “Road to….” movies, considered by many to be the most successful “buddy” pictures ever.

Spielberg, of course, has a Hollywood connection all his own, having been named for Steven Spielberg, the towering Tinsel Town figure who has proven to be one of cinema’s quintessential figures as a director, producer and screenwriter with dozens and dozens of major movie credits on his ledger.

Spielberg, the racehorse, is a son of the top stallion Union Rags and has had a four-race career this season that has seen him twice go stakes-placed in Grade I races and then finally find the winner’s circle in a straight maiden race at Del Mar on November 1. Trainer Bob Baffert sends his charge back two weeks later and will have the meet’s leading rider, Abel Cedillo, in the tack for his run in the Hope.

Here’s the full field for the Sunday stakes in post-position order with riders and morning line odds:

Spielberg’s chief threat would appear to be Weston, a gelded son of the War Front stallion Hit It a Bomb who has a pair of wins under his belt, including a tally in the Best Pal Stakes during the Del Mar summer meet. His last start saw him chase home Dr. Schivel and Spielberg in the Grade I Del Mar Futurity on September 7. The bay since has put in a series of sharp workout at Santa Anita for trainer and part-owner Ryan Hanson.

Ambivalent will have his backers in the sprint, too. The Constitution colt, a $550,000 2-year-old-in-training purchase earlier this year in Florida, is still a maiden, but it isn’t for want of trying. This will be his sixth start and he’s got a pair of stakes placings on his resume, as well as a pair of second-place finishes in straight maiden races. He runs out of the stable of trainer Doug O’Neill.

First post Sunday is the usual 12:30 p.m. with the featured Hope scheduled to go off at approximately 4 p.m.