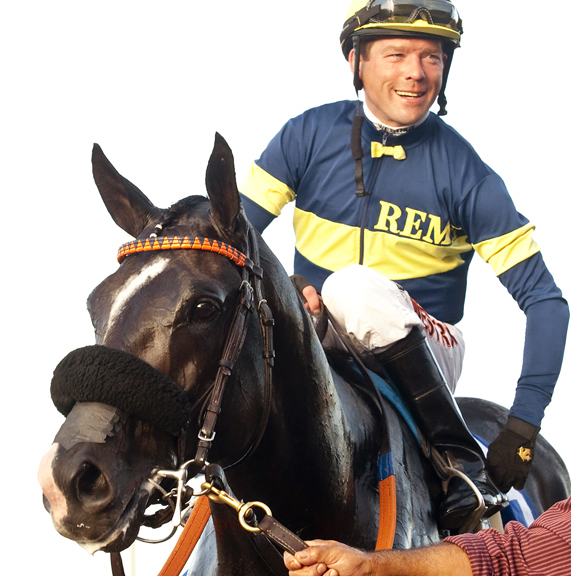 Midnight Storm, a lightly-raced three-year-old lightly-regarded in the wagering at 17-1, made his stakes debut in brilliant fashion Sunday as he ran away and hid from seven rivals under jockey Tyler Baze in the 70th running of the Grade II $300,000 Del Mar Derby.

Taking the lead early in the nine-furlong grass course test of sophomore runners, Midnight Storm relaxed under Baze to set moderate fractions until the far turn where he picked up the pace to cruise home by 3 ¼ lengths in 1:47.47. He stepped his last three furlongs in a brisk 35 seconds to secure the victory.

Longshots finished second, third and fourth, respectively, as Sawyer’s Hill (12-1) beat Talco (8-1) by a head for runner-up honors, with Sammy Mandeville (15-1) another 1 ¼ lengths back in fourth position.

Major disappointments were 8-5 favored Enterprising, the winner of the Oceanside Stakes and La Jolla Handicap who finished a non-threatening sixth under Mike Smith,  and 2-1 second choice Flamboyant and Joel Rosario who were eighth and last.

Midnight Storm, a son of Pioneerof the Nile owned by Alex Venneri and Marjorie Post Dye and trained by Phil D’Amato, came into the Del Mar Derby from a win in an optional claiming race August 10. The colt was in the barn of trainer Jorge Gutierrez to start the meeting, running eighth in a six-furlong race on the main track. After that July 23 outing, he was transferred to the stable of D’Amato.

In the first of two supporting features on Sunday’s program, Zayat Stables’ Jojo Warrior, the even-money choice ridden by Martin Garcia, led from start to finish to win the $100,000 Torrey Pines for three-year-old fillies.

Jojo Warrior, from the barn of trainer Bob Baffert, hustled to the front from the gate and was in command throughout, winning by three-quarters of  a length in 1:37.10 for the mile on the main track.

Tiz Kissable, 9-1 under Baze, closed strongly for second, a half-length ahead of Thegirlinthatsong, with More Complexity fourth in the field of six fillies. Delta Flower was scratched.

Jojo Warrior, a daughter of Pioneerof the Nile, was scoring her third win in six races and first money of $60,000 increased her money-won to $260,781. In her previous effort, June 21 at Santa Anita, the filly won the Grade II Summer Oaks.

Red hot Rafael Bejarano, closing in on his third straight Del Mar riding title, won the $94,750 Tranquility Stakes astride 7-10 favored Broken Sword, his fourth victory without a loss on the card. He came back in the next race, the eighth, to make it five-for-five on another favorite, 4-5 Diamond of Blue. The streak stopped when he was fourth on Sammy Mandeville in the Del Mar Derby.

Broken Sword, beaten a half-length when second to Iotapa in the Grade I Clement L. Hirsch Stakes August 2, won eased up by 5 ¼ lengths in 1:36.18 for the mile on the main track. Second was Oscar Party, with Scooter Bird third.

After two losing mounts, Bejarano came back in the eleventh and last event to win his sixth race of the afternoon, aboard Halljoy at $8.60. With four winners Saturday and six Sunday, the 32-year-old Peruvian scored ten wins from only 16 mounts over the two-day period.

He is only the fifth jockey in Del Mar history to win six races in a day.

Bejarano now has 40 victories this summer, eleven more than runner-up Kent Desormeaux who collaborated with trainer Bob Hess, Jr. to win for the 12th time this season, with Gold Medallion in the tenth race.

TYLER BAZE (Midnight Storm, winner) -- "We weren't going that slow up there; we were just comfortable. I knew this horse was ready. I worked him the other day five eighths and then had a strong mile gallop out. Phil (trainer Phil D'Amato) trains them just like Mike (former trainer Mike Mitchell, who was D'Amato's mentor) used to. Sure was nice to go uncontested out there. No pressure helps. This is the first time I've won this race. Del Mar has been good to me."

COREY NAKATANI (Talco, third) -- "Dynamite race for him; to close into those slow fractions -- a terrific effort. John (trainer John Sadler) said he knew this horse was full of class and that he thought this distance was going to be too short for him. But he said let's give him a try and see what we've got. I think they can see they've got a really nice horse here."

MIKE SMITH (Enterprising, sixth) -- "Absolutely no pace. Nothing to run at. You have to make a decision with this horse right out of the gate. If you ask him to go, he'll go. But I was concerned about the extra distance and I thought there'd be more pace. Just didn't happen."

JOEL ROSARIO (Flamboyant, eighth) -- "They were just too slow up front for us. Those leaders just kept on going."

PHIL D'AMATO, (Midnight Storm, winner) -- "I was very confident because I've never had a horse train for a race like this before. The last race didn't take anything out of him. Tyler (Baze) breezed him (between races) and he galloped out a mile in 1:39 and change and only really good horses do that on this racetrack. He gave me every indication he was going to give his best."

The stakes win for Baze was his second of the meet, but first in the Del Mar Derby. He now has 24 stakes wins at Del Mar.

The stakes win for D'Amato was his third of the meet in his first season of training at Del Mar. 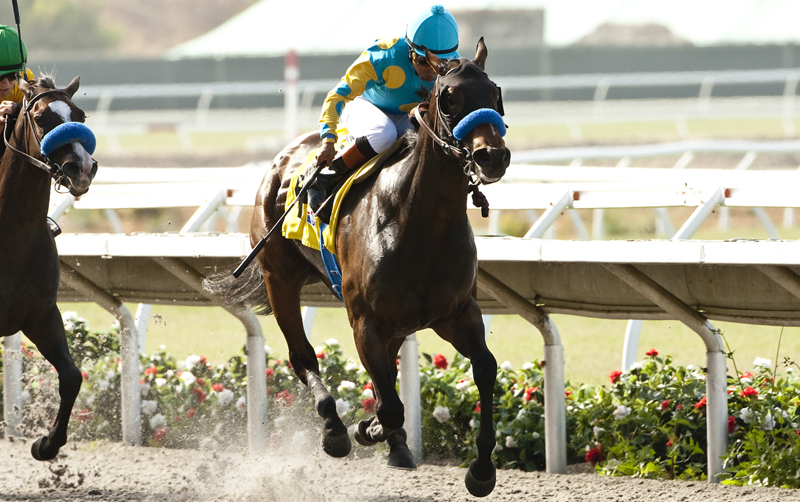 MARTIN GARCIA (Jojo Warrior, winner) -- "She's just improving and improving. The last time she ran (Summer Oaks, Santa Anita, 6/21) she just came out of there so fast we just went on with it. This time I thought there was more speed in the race, but I wasn't going to fight her. I just let her go and she did it from there. She's a good filly and she showed it again today."

TYLER BAZE (Tiz Kissable, second) -- "She's a hard-trying filly. There just isn't enough ground for her. All the races around here are a mile. She needs a mile and an eighth."

MIKE SMITH (Fashion Plate, fifth) -- "I was hoping to make the lead with her, but today just wasn't her day."

BOB BAFFERT,  (Jojo Warrior, winner) -- "She was just screaming out for two turns. The dam has been getting mostly sprinters, but I think the Pioneerof the Nile (sire genetic influence) really moves her up for distance. I knew she was very fit and we've been waiting for this race."

The stakes win was the second of the meet for Garcia, but his first in the Torrey Pines. He now has 19 stakes wins at Del Mar.

The stakes win was the second of the meet for Baffert and his fourth in the Torrey Pines. He now has 107 stakes wins at Del Mar, the most by any trainer.

The winning owner, Zayat Stables, is the nom de course for Ahmed Zayat of Hackensack, NJ.