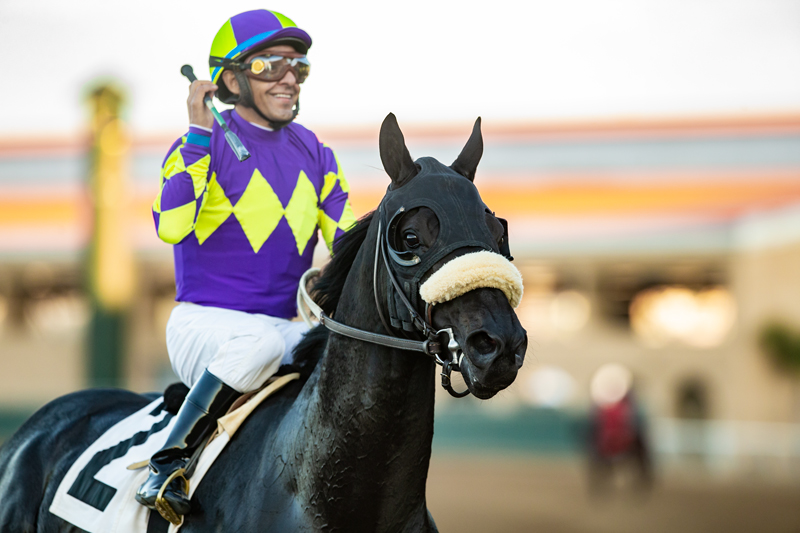 C R K Stable’s Midcourt, the defending champion in Saturday’s $100,000 Native Diver Stakes, looms as the one to catch and the one to beat in the 42nd edition of the nine-panel headliner that honors one of California’s all-time great racehorses.

The Grade III stakes has drawn a short field of five and will be presented early on the nine-race Del Mar program – Race 2 to be exact. With the regular 12:30 first post in place, the stakes should go off shortly after 1 p.m.

Native Diver was the first California-bred to win $1 million in purses as he raced a remarkable 81 times between 1961 and 1967. The near-black speedster by Imbros out of the Devil Diver mare Fleet Diver – so popular and so ubiquitous that he earned the nicknames “The Diver,” “The California Comet” and “The Black Horse” -- won an equally remarkable 37 races including a trio of local victories in the San Diego Handicap and a tally in the Del Mar Handicap on September 4, 1967 that was the final start of his exceptional career.

Midcourt, a gelded 5-year-old by Midnight Lute, has won five of his 14 starts, including his five and three-quarter length triumph in last year’s Native Diver. The John Shirreff’s-trained runner – a winner of $546,695 in purses -- has been handled by Victor Espinoza in most of his career starts and will have the Hall of Fame rider in the tack again Saturday. He’s been running very competitively with Grade I horses of late and is listed as a solid 4/5 favorite on the Native Diver morning line.

Here’s the lineup for the Saturday feature from the rail out with riders and morning line odds:

Combatant has a notable bankroll – all $1,049,498 of it. The 5-year-old ridgling by the late sire Scat Daddy has a claim to fame in capturing this year’s edition of the Grade I Santa Anita Handicap back in March, one of his four wins (to go with five seconds and five thirds) in 28 total starts. John Sadler trains Combatant.

The first 36 runnings of the Native Diver were held at the now defunct Hollywood Park in Inglewood near Los Angeles International Airport. Upon his death, Native Diver was buried on the Hollywood Park grounds. But when the track was closed (and remade into what is now SoFi Stadium where the L.A. Rams and the L. A. Chargers play professional football), the horse’s remains were dug up and shifted to Del Mar where they were reinterred in its infield.