Maximum Security Voted Horse of the Meet for 2020 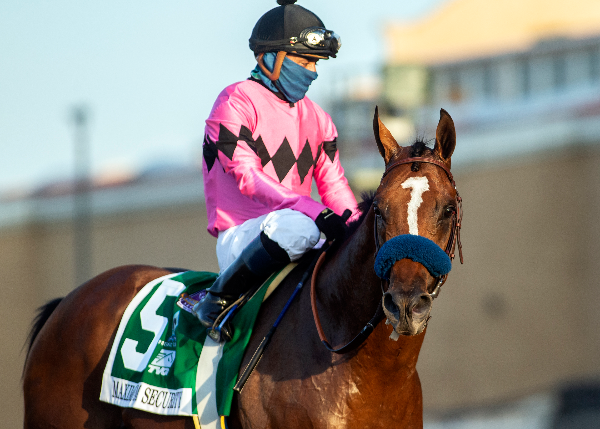 Gary and Mary West and partners’ Maximum Security was unanimously voted the Horse of the Meet for Del Mar’s 81st summer season in a poll of racing media.

Victories in the San Diego Handicap and the TVG Pacific Classic by the 4-year-old West Stables homebred son of New Year’s Day made the choice for Horse of the Meet and Top Older Horse easy for voters, some of whom casts ballots electronically since COVID-19 rules limited on-site attendance.

The first two starts for Maximum Security since being transferred to the care of Hall of Fame trainer Bob Baffert – also comeback efforts following a five-month layoff after a disputed victory in the inaugural $20 million Saudi Cup -- were scintillating for racing aficionados.

In the San Diego on July 25, “Max,” as he’s known around the stable, had to dig deep into his competitive spirit to edge Midcourt by a nose. Given a month more of training under Baffert, Maximum Security produced a dominating wire-to-wire, 3-length victory in the $500,000 TVG Pacific Classic, the winner’s share of the purse putting him over $12 million in career earnings.

Maximum Security was not the only unanimous choice in the voting.

The West’s solely owned homebred Fighting Mad, a 4-year-old daughter of New Year’s Day trained by Baffert and, like Maximum Security, ridden by Abel Cedillo, was marked on every ballot for Top Older Filly/Mare as a result of her victory in the Clement L. Hirsch Stakes on August 2.

Unanimity was also expressed for the winners of the Grade I,  $250,000 stakes for 2-year-olds which highlight the final two days of the meeting. Princess Noor earned Top 2-Year-Old Filly honors off her win in the Del Mar Debutante and Dr. Schivel was Top 2-Year-Old via his victory in Monday’s Del Mar Futurity.