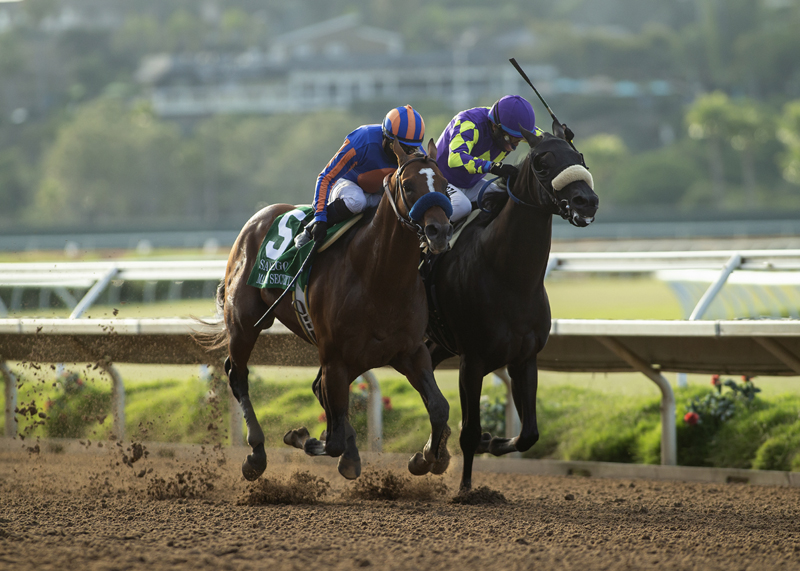 Champion Maximum Security make his comeback Saturday at Del Mar a winner – but only just. The Gary and Mary West homebred colt worked hard through the stretch to get past C K Stable’s Midcourt, but get there he did by a nose at the finish of the Grade II, $150,000 San Diego Handicap.

It was the first start in five months for the 4-year-old son of New Year’s Day and he accomplished it under topweight of 127 pounds in 1:44.54 for the mile and one-sixteenth. He was ridden for the first time by Abel Cedillo for trainer Bob Baffert as he picked up a winner’s share of $90,000 for his efforts.

Stoutly favored at 2-5 in the five-horse field, Maximum Security returned $2.80, $2.20 and $2.10 across the board. His winning purse pushed his massive earnings to $11,891,900. The Wests have several partners in the colt, including Michael Tabor and John Magnier. In the San Diego he sported the colors of the massive Coolmore breeding operation where he will go to stud next year in Kentucky.

In the race before the San Diego, Gary Barber’s favored Laura’s Light made the lead turning for home on the turf course, then held off the late charges of two rivals to tally by three-quarters of a length in the Grade II, $150,000 San Clemente Stakes for 3-year-old fillies.

Her rider also was Abel Cedillo, who wound up capturing three races on the afternoon’s 11-race card.

Both of the Grade IIs run today were considered key preps for Grade I races later in the meet – the $500,000 TVG Pacific Classic in the case of Maximum Security and the $250,000 Del Mar Oaks for Laura’s Light. Each of those races will be run at Del Mar on August 22 as part of a five-stakes program and both winning trainers today gave indications that their charges would be pointed in that direction.

Earlier on the card in the $65,000 Smiling Tiger Overnight Stakes, MyRacehorse.com and Slam Dunk Racing’s Vertical Threat outran three foes to score by five and a quarter lengths under Heriberto Figueroa.  The 3-year-old colt trained by Richard Baltas ran six furlongs in 1:10.47.

Racing resumes at Del Mar tomorrow with an 11-race card beginning at 2 p.m.

ABLE CEDILLO (Maximum Security, winner) – “He broke really well and we were in front. Then that horse outside me (Midcourt) rushed up and I didn’t want to have to deal with him, so I just let him go. Then on the backstretch that other horse (Higher Power) came up inside me, but I felt OK. My horse was fine. When we turned for home I had to get to work. I knew I was going to do that. He’s the kind of horse you have to ride all the way. You have to keep working on him. We got it done. I thought I’d won the photo, but you can never be sure about those thing. But it came out right.”

BOB BAFFERT (Maximum Security, winner) – “That was crazy. I knew I didn’t have him really drummed up for this race, we were going to use this to get ready for the next one. But we’re learning about the horse. He won today when he had every reason to get beat. He showed what a great horse he is today. He’s such a fighter. I’m glad we got this over with and now he’s in good shape.”

The stakes win was the second of the meet for rider Cedillo, but his first in the San Diego. He now has four stakes wins at Del Mar.

The stakes win was the first of the meet for trainer Baffert, but his second (2014, Fed Biz) in the San Diego. He now has 134 stakes wins at Del Mar, far and away the most of any trainer in track history.

The winning owners (and breeders) are Gary and Mary West of Rancho Santa Fe, along with partners Magnier, Tabor and others.