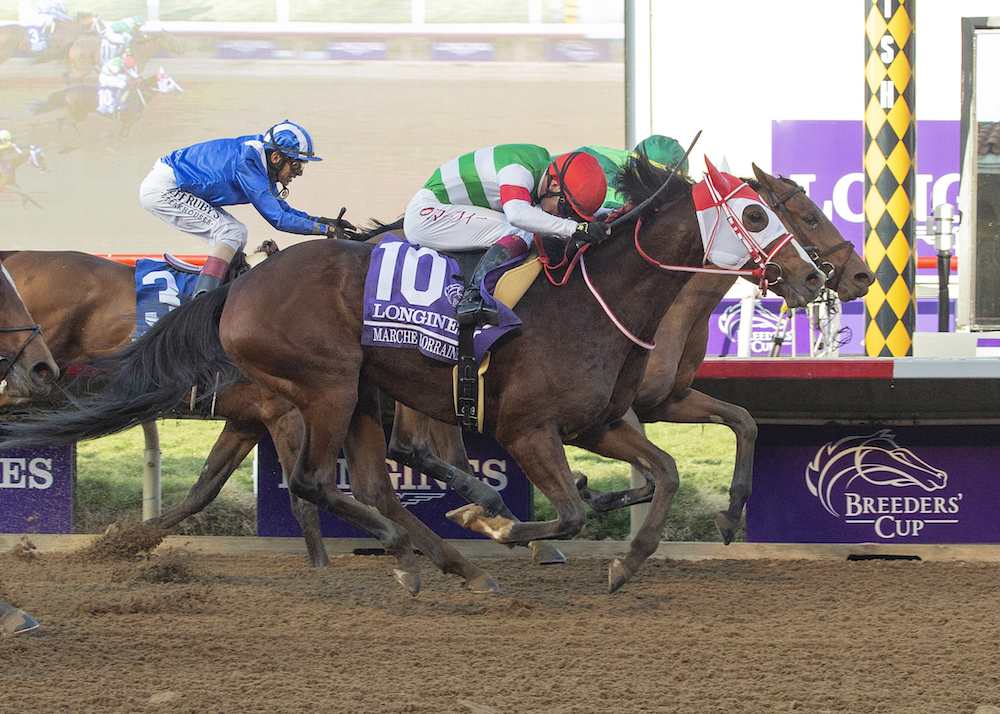 Trained by Yoshito Yahagi and ridden by Oisin Murphy, Marche Lorraine covered the 1 1/8 miles on a fast main track in 1:47.67. It is the second victory of the afternoon for Yahagi, who saddled Loves Only You (JPN) to win the Maker’s Mark Filly and Mare Turf (G1). It is Murphy’s first Breeders’ Cup victory.

Private Mission led a wild scramble for the early lead that included favored Letruska through fractions of :21.84 and :44.97 as Marche Lorraine and Dunbar Road raced near the rear of the field.

As the field approached the far turn, the early leaders were cooked as Marche Lorraine surged to the front in the middle of the track with Royal Flag and Clairiere to her outside and Dunbar Road and Malathaat surging to her inside.

Marche Lorraine put away her two outside rivals and then surged again in the shadow of the wire to repel the bid by Dunbar Road.

Winning Jockey Oisin Murphy (Marche Lorraine) – “An amazing day, I couldn’t be happier. I sat on her during the week in morning exercise and she felt good. They went very fast on the front end which helped me. I’m very grateful to the owners for putting me up. I love riding in Japan so to have a Japanese winner at the Breeders Cup, it couldn’t be better.

“I just followed Jose Ortiz. He has a lot more experience on dirt than I have. When he wasn’t going early I knew the fractions were very fast. To be honest, I could have waited a little longer going into the turn. But, I thought that if I waited longer then I’m going to be pushed wider going into the turn. So, if I could kind of get on the back of the Qatar filly, Shedaresthedevil, that’s what I did so I didn’t have a super wide trip going into the straight.”

Trainer Chad Brown (Dunbar Road, second) – “I need to watch the replay. It’s a tough beat. I thought we got the headbob, there. It’s probably the toughest loss I’ve ever had. It’s just a shame because it’s two years in a row where she really should have won the distaff. She got a bad trip last time too. No one can convince me otherwise. She had some trouble down the backside and she ended up on the inside where I really didn’t want her. The track is better outside. It just happened that way. Jose did the best he could and she gave a valiant effort. I’m really proud of her. It’s a shame her career ended this way. I thought she was a deserving winner of this race.

Jockey Jose Ortiz (Dunbar Road, second) – “We had a real good trip. At the half mile pole there was room inside, so I waited for the stretch to ask her. We got through and she finished strong. I thought I got it at the wire.”

Trainer Todd Pletcher (Malathaat, third) – “We got a great pace setup. She was getting a smooth trip. At the top of the stretch, she kind of got squeezed in between horses and had to fight her way through and looked like she was just a little intimidated and kind of cocked her head a little bit. Once she got clear she was closing back again and gaining ground. It was a huge effort. I’m very proud of her. I just hate to ever see her lose. She’s a superstar and she lost nothing in defeat.”

Jockey John Velazquez (Malathaat, third) – “She ran really hard. She was a little uncomfortable in there but she got through on the rail, I got her clear for a minute but then got sucked back in.”

Trainer Steve Asmussen (Clairiere, fourth) – “It’s about three-quarters of a length from where we wanted to be. She was further back than I was hoping early, but Ricardo (Santana Jr.) said she wasn’t running into this dirt right away. When he got her out, she made a good run. It looked like she got fanned out in the stretch.”

Jockey Ricardo Santana Jr. (Clairiere, fourth) – “I was happy with her. She’s only three years old and has a very bright future. I can’t wait to see her next year.”

Jockey Irad Ortiz (Letruska, 10th as the favorite) – “They went too fast. They didn’t want her to be on the lead. They went after her. She wants to run and I tried to slow her down as much as possible, but it didn’t work out.”