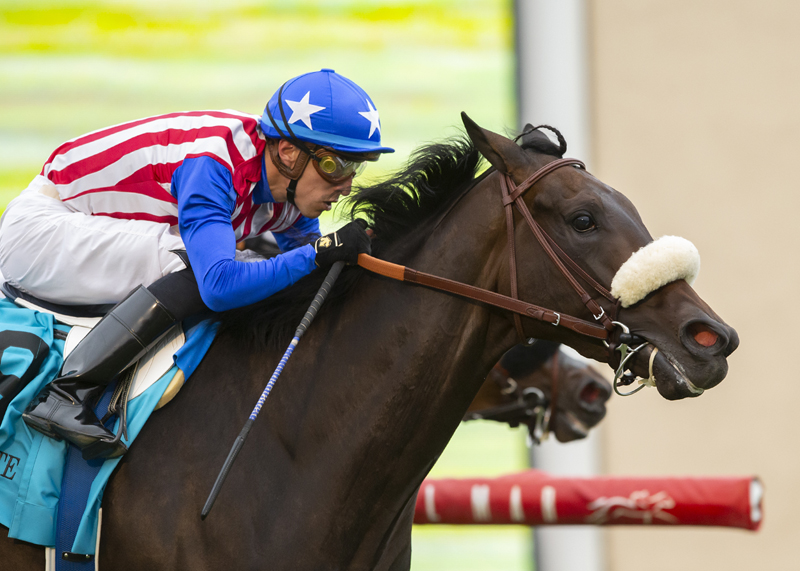 Kaleem Shah’s Madone saved ground early, then launched a strong outside bid from the three-eighths pole home to prove a half length best Saturday in the $202,500 San Clemente Stakes for 3-year-old fillies.

The winner, a daughter of the Australian sire Vancouver though bred in Kentucky, covered a mile on turf in the Grade II feature in 1:35.28 and got the measure of race favorite Going Global, the 2-5 choice running in the silks of Dubb, Gevertz or Nentwig and partners. Finishing third was Slam Dunk Racing or Platts’ Tetragonal.

Trainer Simon Callaghan saddled Madone and indicated that his filly would next be pointed to the Grade I, $300,000 Del Mar Oaks, the championship race for soph fillies at the shore track’s summer meet. That race is part of a five-stakes card on Saturday, August 21.

JUAN HERNANDEZ (Madone, winner) – “That was the plan, to lay back then come running. Simon (trainer Simon Callaghan) said to keep her covered up and save ground. That’s what I did. On the turn (for home), I took her out and she gave it to me. She really came running. Nice win for sure.”

SIMON CALLAGHAN (Madone, winner) – “We were able to save ground and they were going quick early, so I was happy with our spot early. He (jockey Juan Hernandez) made a wide early move but it was the right one. She’s got a nice turn of foot and she’s such a good filly. I blame myself (for sixth-place result in the Grade III Honeymoon on May 22 at Santa Anita); I ran her back too quickly. She bounced, it’s as simple as that. We’ll now look to the Del Mar Oaks.”

The stakes win was the second of the meet for rider Hernandez, but his first in the San Clemente. He now has nine stakes wins at Del Mar.

The stakes win was the first of the meet, but his second in the San Clemente (Up In Time, 2011). He now has 15 stakes wins at Del Mar.

The winning owner is Kaleem Shah of San Diego and Vienna, VA.