Loud Mouth Pulls a Surprise in Cary Grant Under Cedillo 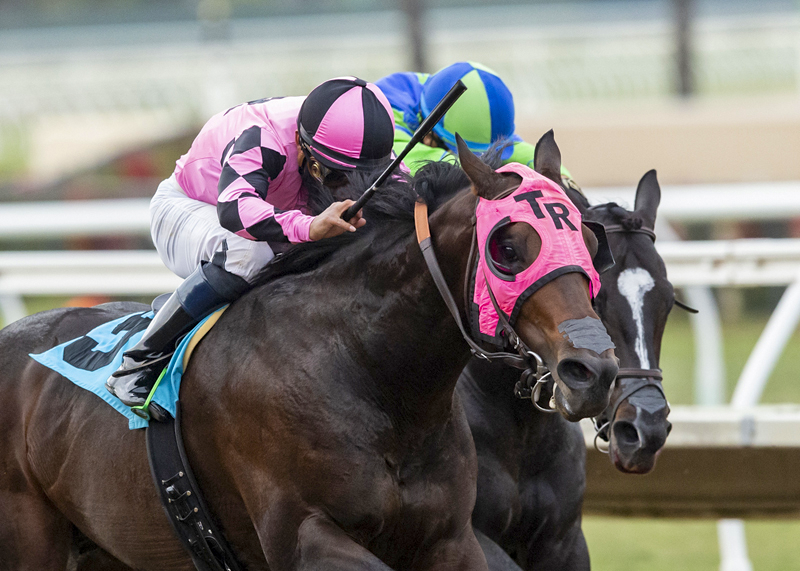 Thomsen Racing’s Loud Mouth tracked the leaders early, then fired his best shot in the lane under leading rider Abel Cedillo and came away with a three-quarter length score in the seventh running of the Cary Grant Stakes Sunday at Del Mar.

The 4-year-old colt by Boisterous rang up his first stakes score in the Cal-bred offering, besting six rivals in 1:22.34 for the seven panels.

It was the second win on the day for Cedillo, who now has 18 firsts in 11 days of racing. Loud Mouth is trained by Steve Knapp.

The victory gave Cedillo another notch on his belt toward winning his second straight Bing Crosby Season title at Del Mar. He is currently eight wins ahead of his nearest rival with four days left in the meet. Last year the 31-year-old from Guatemala won honors with 13 victories.

The winning owner, Ron Thomsen, lives in Valley Center, which is about 32 miles northeast of Del Mar.

Racing will resume at Del Mar on Thanksgiving Thursday with an early first post at 11 a.m. It will be the start of a dynamic final four days of the season with seven graded turf stakes up for grabs, including Grade I offerings on Saturday (Hollywood Derby) and Sunday (Matriarch Stakes).

ABEL CEDILLO (Loud Mouth, winner) – “I could tell they were going fast up front, but I had my eye on the favorite (Galilean). I was tracking him. When he made his move (on the turn), I moved with him. Then I went by him in the straight and went after the leader (Take the One O One). My horse had it and we got him.”

STEVE KNAPP (Loud Mouth, winner) – “I kept experimenting with him to find out what and how far he wanted to run. He got some real questionable rides, several of them, but I knew this horse could run. We went the seven today and worked out and he ran huge. This horse has a big heart and when he gets to the lead or gets close, he runs. And he’s got a really nice way of moving. He’s a runner and this is a hell of a win.”

The stakes win was the second of the meet for rider Cedillo, but his first in the Cary Grant. He now has nine stakes wins at Del Mar.

The stakes win was the first of the meet for trainer Knapp and his first in the Cary Grant. He now has four stakes wins at Del Mar.

The winning owner races under Thomsen Racing. He’s Ron Thomson from Valley Center, CA, which is about 32 miles northeast of Del Mar.