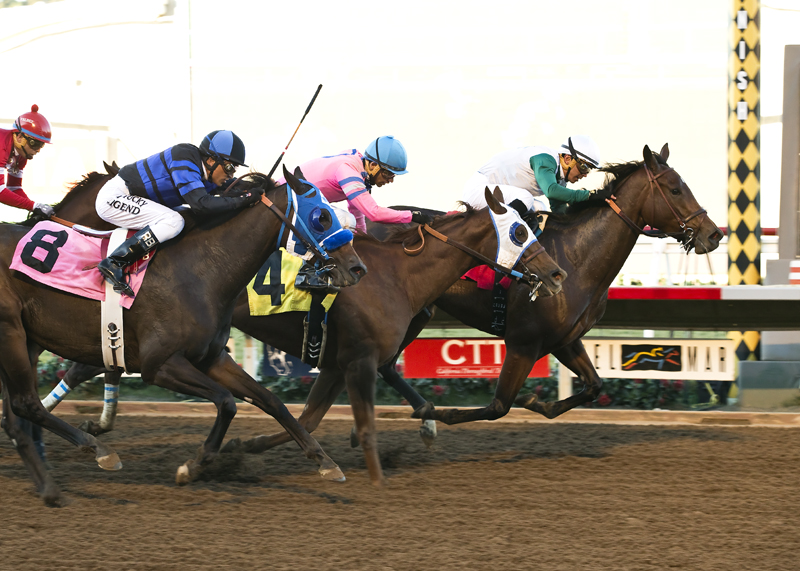 Tiz Ladys Legs © Benoit Photo
Tiz Ladys Legs, lightly-regarded at 19-1 under jockey Fernando Perez, dug in gamely after being passed in deep stretch to re-rally and win Del Mar’s featured race Friday, a one-mile race on the main track for older fillies and mares.
Tiz Ladys Legs was sent to the front shortly after the start by Perez, led into the upper stretch where she was challenged with Cadet Roni taking the lead and appearing headed for victory. However, Tiz Ladys Legs responded to Perez’s urging to come on again and score by a neck over the fast-closing Sarahline. Cadet Roni was another neck back in third.
Tiz Ladys Leg, a daughter of Tiznow owned by the Stepaside Farms of Declan Jackson of Sanger, California and trained by Hall of Famer Neil Drysdale, ran the distance in 1:37.82 and returned $40.40, $19 and $8.40 after registering her second win in six starts.
Runner-up Sarahline paid $7.60 and $5, while Cadet Roni paid $4 to show.
There were no perfect tickets in Friday’s Pick Six. Therefore, Saturday’s nine-race program will feature a Pick Six carryover of $39,655. Post time for the first race is 12:30 p.m.