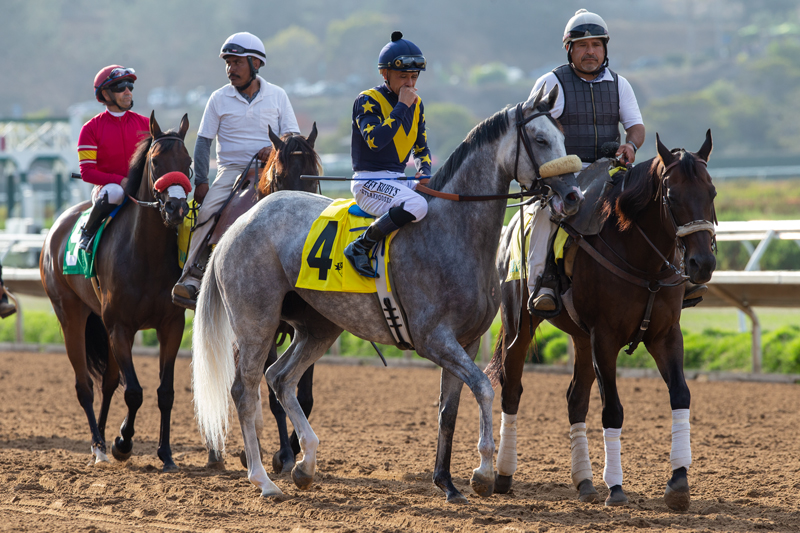 Eleven furlongs of serious running is a long way to travel for a racehorse, but it’s not unheard of. Saturday, eight fillies and mares have signed up to do just that in the CTT & TOC Stakes, an overnight affair that offers a purse of $80,000 and some black type for those who perform well.

A gray mare and a bay mare in the lineup look to have a better-than-average chance to pull off the score in the mile and three-eighths marathon and they would be LNJ Foxwood’s Tapwater (she’s the gray) and Alpha Delta Stables’ Rideforthecause (she’s the bay). Both are 5-year-olds who have run long before and both have good grass credentials.

Morning line maker Jon White has hung Rideforthecause as the slight 5/2 favorite in the feature. He’s made Tapwater and Madaket Stables, De Seroux or Naify’s Neige Blanche co-second choices at 3-1.

Tapwater is a daughter of the high-line stallion Tapit and has won a trio of races on the green while earning $177,080. She comes out of the barn of Hall of Fame trainer Richard Mandella and will be handled by turf riding ace Umberto Rispoli.

Rideforthecause, by Candy Ride, has won five races and more than $360,000. All five of her tallies have come on turf and she comes off a grass route score in the Possibly Perfect Stakes at Santa Anita on June 13. She’s conditioned by Mike McCarthy and he’s signed on Mario Gutierrez to do the horsebacking.

Neige Blance is a 4-year-old French-bred by the Irish stallion Anodin and can boast of four wins from 12 starts, including a nose victory in the Grade III Santa Barbara Stakes at Santa Anita on May 8. She comes out of the barn of conditioner Leonard Powell, who has named Juan Hernandez to ride.

Here’s the full field for the CTT & TOC from the rail out with riders and morning line odds:

The race is named to honor two key elements in the racing community through their representing groups – the trainers (California Thoroughbred Trainers) and the owners (Thoroughbred Owners of California).