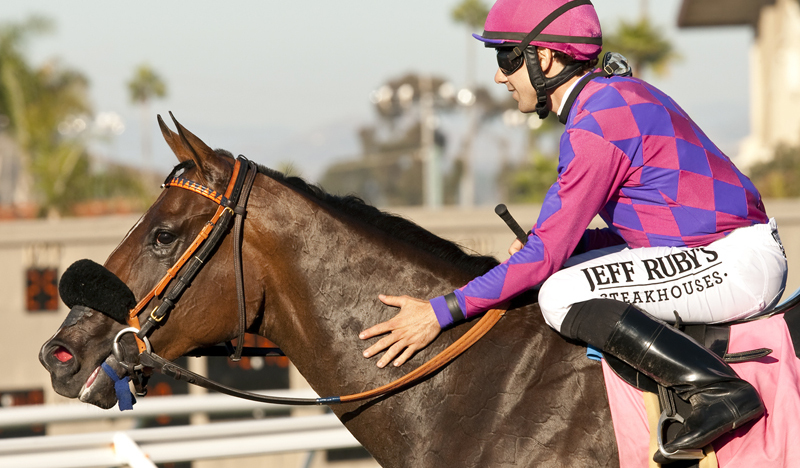 Rallying on the far outside in the stretch, Long Hot Summer wore down 5/2 My Fiona and 2-1 favored Lost Bus to win by three-quarters of a length in 1:10.94 for the six furlongs on the main track.

My Fiona, winner of the C.T.B.A. Stakes this season over Lost Bus, again prevailed over her rival, this time by a nose for runner-up honors. Easter Fever was a distant fourth in the field of eight fillies. Scratched from the race were Desert Steel and Do The Danse.

Long Hot Summer, a daughter of Street Boss purchased for $260,000 at the Barretts sale last May, is now two-for-two in her brief career,  having broken her maiden at first asking August 9 at Del Mar. She is trained by Phil D’Amato.

Rafael Bejarano, Del Mar’s two-time defending riding champion, booted in three winners to expand his lead in the standings, 29-25 over Kent Desormeaux and Mike Smith. Bejarano’s winners were Silk in Silver in the second, Wedding Blush in the sixth and Maxx the Giant in the seventh.

Desormeaux and Smith each had a single winner.

There was a single winning ticket in the Pick Six and it was worth $70,930.

JOE TALAMO (Long Hot Summer, winner) – “She got out of there (the gate) pretty good today. She was just a little tardy last time, but this is only her second start. This is some job by Phil (trainer Phil D’Amato). Bringing her back like this in just over two weeks. But she’s an exceptional filly and I was loaded turning for home. She was running hard at the finish. Those two in front weren’t stopping, but my filly was running good. I don’t think distance will be a problem either. She galloped out strong.”

FERNANDO PEREZ (My Fiona, second) – “This was a good race for her. She was relaxed all the way and when I asked her she gave me everything. We just got beat.”

VICTOR ESPINOZA (Lost Bus, third) – “She ran pretty good, but she really didn’t like this track a lot. She was struggling out there. I think she’ll go better on dirt.”

PHIL D’AMATO, (Long Hot Summer, winner) – “This filly acts like an older horse. She’s got a great mind. You can put her inside or outside of horses, whatever. Joe had to use her, start and stop a couple of times, and it didn’t seem to bother her. Once she got in the clear, she just took off and she wasn’t blowing afterwards. The longer the better with her. It does a little (soothe the pain of Obviously’s loss in Sunday’s Del Mar Mile).  I still think he’ll make amends Breeders’ Cup time.”

The stakes win was the second of the meet for Talamo, but his first in the Generous Portion. He now has 35 stakes wins at Del Mar.

The stakes win was the third of the meet for D’Amato, who is in his first summer of training at Del Mar.

The winning owners are Anthony Fanticola from Newport Coast, CA and Joseph Scardino from Glendora, CA.