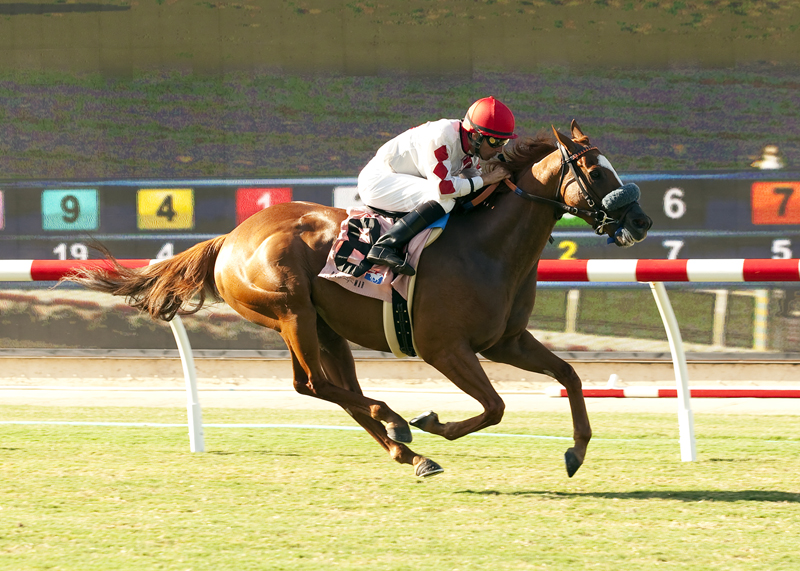 Lil Bit O’Fun, a six-year-old gelding claimed for $40,000 last summer at Del Mar, scored his third straight victory for his new owners, rallying from far back under jockey Aaron Gryder to win the featured $95,500 Wickerr Stakes Wednesday in a $43.60 surprise.

Lil Bit O’Fun, a son of Langfuhr trained by Phil D’Amato,  was next-to-last in the field of nine in the early stages of the one-mile race over the infield Jimmy Durante Turf Course. Steered to the outside by Gryder entering the stretch, he turned in a powerful run which propelled him 2 ½ lengths clear at the wire. Final time was a quick 1:32.35.

Rangi, a 19-1 outsider ridden by Kent Desormeaux, nosed out Bright Thought for second, with Boyett fourth another 1 ¼ lengths farther back.

Lil Bit O’Fun earned a prize of $56,700 for his triumph, his seventh in 32 lifetime outings to push his bankroll to $392,773. After being claimed by owners Philip Belmonte, Henry Cohen and Mark Gorman, the horse won a turf sprint at Santa Anita in October and then was out of action until mid-June of this year when he won an optional claiming race at the Arcadia track

No Jet Lag, the 2-1 favorite, finished eighth after bearing out badly on the clubhouse turn.

With no perfect tickets in the Pick Six, Thursday’s program will feature a carryover of $67,343. Post time for the first race is 2 p.m.