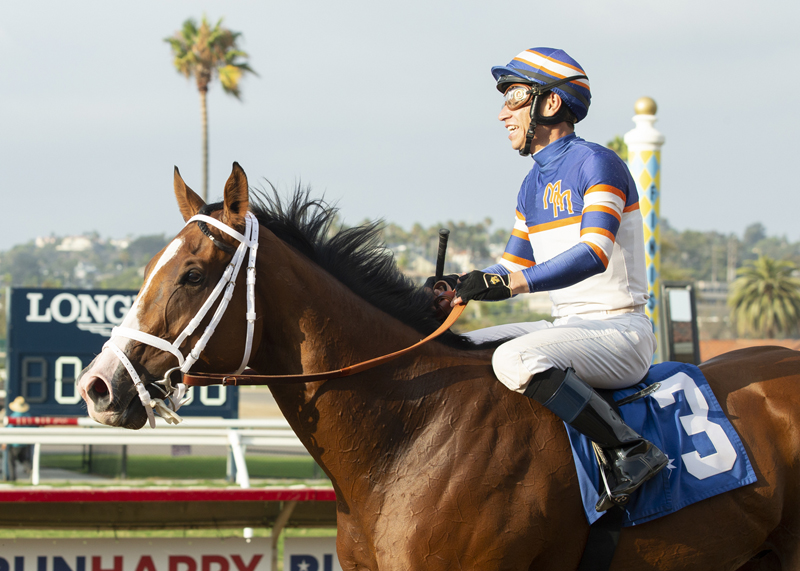 The 5-year-old gelding by Alexander’s prime stallion, Grazen, shook off pressure early, then cleared late to finish two and a quarter lengths best in the dash for 3-year-olds and up. He picked up a check for $60,000 for the win and pushed his bankroll to $543,740.

Finishing second was Hogan or Hogan’s Give Me the Lute, a neck in front of Slam Dunk Racing, Old Bones Racing Stable and Nentwig’s Gregorian Chant.

GEOVANNI FRANCO (Lieutenant Dan, winner) – “No special instructions for me; I know this horse well. Since he’s come back from his layoff (was away from June 2020 to July 2021), he’s more puffed up. He’s acting like a bully. He’s doing good now. When I made the lead in the straight, I wasn’t worried about the others behind me coming to get us. But I wasn’t going to wait for them either.”

STEVE MIYADI (Lieutenant Dan, winner) – “In this day and age you’re always worried about the bounce. I didn’t train him particularly hard for (a win here July 23), because I was thinking about this race and I was pleasantly surprised at how well he ran. That’s when you worry about the bounce. He overcame my training.”

The stakes win was the first of the meet for rider Franco and his first in the Green Flash. He now has four stakes wins at Del Mar.

The stakes win was the first of the meet for trainer Miyadi and his first in the Green Flash. He now has four stakes wins at Del Mar.

The winning owner and breeders is Nick Alexander of Santa Ynez and Del Mar, CA.