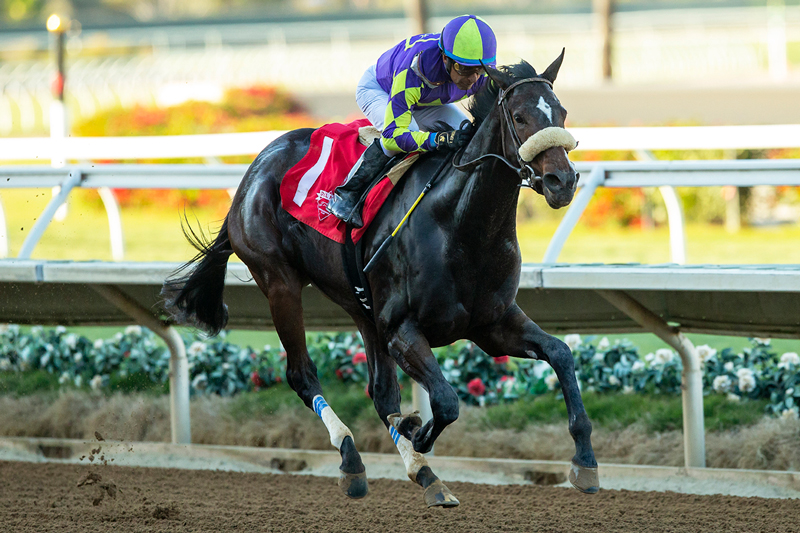 The 2-year-old filly Justique ran a sparkler in winning Saturday’s Desi Arnaz Stakes, then the 4-year-old gelding The Chosen Vron followed that up with a strong tally in the Cary Grant Stakes on a doubleheader card that real racing fans had to appreciate.

Both horses were favored and both ran races that said bigger and better things are coming soon.

Justique, a daughter of Triple Crown winner Justify owned by the C R K Stable of Lee and Susan Searing, spotted her six rivals many lengths with a slow start, then gradually at first, then quicker and quicker, ran by them all and just cantered home a two and a quarter length winner in the $101,000 feature.

The Chosen Vron, a son of the late California sire Vronsky, was in the race from the start, took aim at the leader Big City Lights at the three-eighths pole and then just outran him to the wire to score by three and a quarter lengths at the finish of huis $100,000 headliner. He’s owned by a partnership headed by John Sondereker, who races under the name Sondereker Racing.

Both races were at seven furlongs. Justique eased on home in 1:23.41 for the distance; The Chosen Vron, who had run on his mind all the way, finished up in 1:20.66, which was approaching the track record of 1:20.  Hall of Fame rider Victor Espinoza was aboard the big filly, while West Coast newcomer Hector Berrios handled the flashy chestnut gelding.

Justique, who broke her maiden at Del Mar back on July 31 in a similar fashion to today’s effort, is trained by John Sherriffs. She now has two wins in three starts and her $60,000 share of the purse today enhanced her earnings to $132,000.  The Chosen Vron continued his beyond-solid career with his eighth triumph in his 12th start. His $57,000 winner’s pot in the California-bred testing pushed his bankroll up to $513,678. Today’s race was his seventh stakes victory.

The track’s popular Pick Six Single Ticket Jackpot wager proved once again to be too tough for the players and carried over for the fifth time. When racing returns Sunday with a first post of 12:30 p.m., the wager will have a starter pool of $179,386 in the pot to begin the action.

VICTOR ESPINOZA (Justique, winner) – “I don’t try to encourage her away from the gate; I just let her do her thing. I just want her to be happy in her races. The idea is to just get her in her rhythm; to let her do it her way. At the half mile (pole) she started to pick it up. When she wants to, she’s quick; very quick. I moved up next to those horses on the turn and in two or three jumps she’s in front. She’s something. And if she goes longer?  I think she’ll be better.”

JOHN SHIRREFFS (Justique, winner) – “I didn’t get a good look at the break, so you always wonder when she’s got to close a lot of ground, will she be able to do it? I saw her starting to make up ground and I thought ‘Victor’s gonna time it’ and then she kept going.”

The stakes win was the first of the meet for rider Espinoza and his first in the Desi Arnaz. He now has 108 stakes wins at Del Mar, tied for second-most with Corey Nakatani.

The stakes win was the first of the meet for trainer Shirreffs and his first in the Desi Arnaz.  He now has 21 stakes wins at Del Mar.

The winning owners are Lee and Susan Searing of Arcadia, CA, who race under the name C R K Stable. 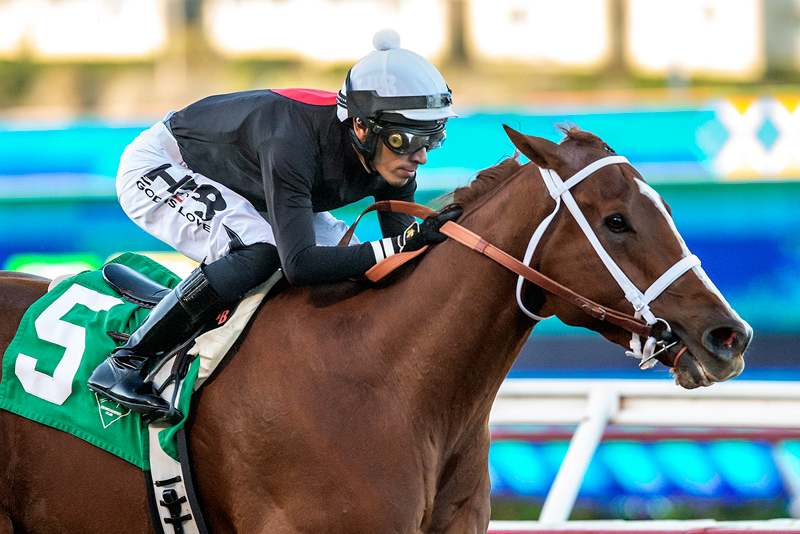 HECTOR BERRIOS (The Chosen Vron, winner) – “He went to the front so easily. He was running so freely today. He felt light. On the turn I had to put some pressure on the leader (Big City Lights), so I really got him running. And he just kept on going from there.”

J. ERIC KRULJAC (The Chosen Vron, winner) – “I was pleased with the way the race set up and I didn’t tell Hector to do anything. He’s been on him before. I just told him to have fun. It sure looks like he’s getting back to his form. Just had to give him time and he’s paying us back tenfold.”

The stakes win is the first of the meet for rider Berrios and his first in the Cary Grant Stakes. He now has four stakes wins at Del Mar.

The stakes win is the first of the meet for trainer Kruljac and his first in the Cary Grant. He now has four stakes wins at Del Mar.

The winning owners are a group led by John Sondereker of Las Vegas, who races under the nom du course Sondereker Racing.