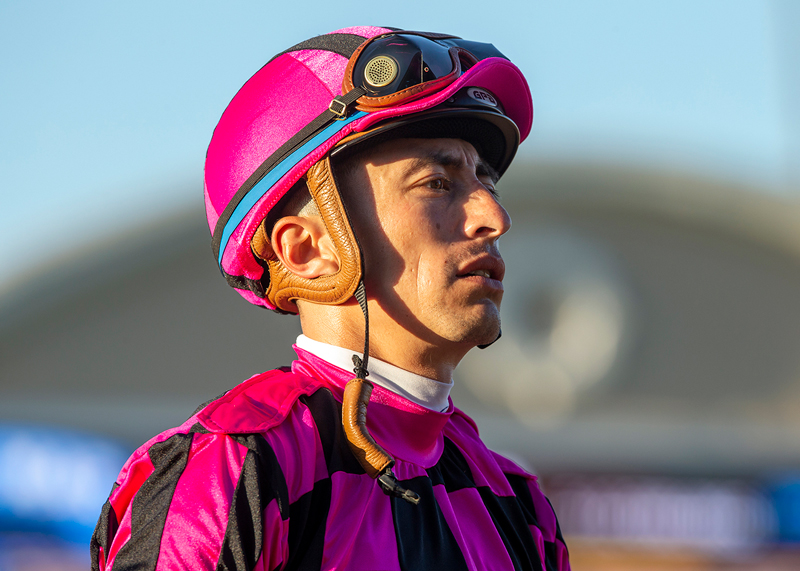 There was a collective sigh of relief in the Santa Anita and Del Mar jockey colonies last spring when Flavien Prat moved his tack back east. Several established riders, sensing a golden opportunity, moved out to Southern California in hopes of filling the Prat void. Lost in all the commotion was a 30-year old rider who had quietly climbed to the top of the jockey standings with no intention of relinquishing his grip.

Juan Hernandez has kept the momentum going and jumped out to an early lead at the Del Mar summer meet, winning 19 races through the first 12 days, seven better than his closest competitor, Umberto Rispoli. He has a 23% win percentage and lands in the money 55% of the time. He’s already exceeded $1 million in earnings at Del Mar with $1,371,096.

“I’m really happy for the people who have supported me a lot,” Hernandez said. “They’ve given me nice opportunities on these horses so, yeah, I’m just really happy right now.”

Through Thursday (August 11), Hernandez has compiled earnings of over $8.2 million in 2022, bringing his career earnings mark to over $57 million and making him currently the ninth-leading rider in the country. He had his best year in terms of earnings last year, collecting over $11 million in purses, good enough to rank 13th in the nation.

As is usually the case, Hernandez’ success is the result of a lot of hard work behind the scenes. He credits his agent, Craig O’Bryan, with lifting him to consecutive riding titles. He clinched the crown at last year’s Del Mar’s fall meet and followed it up with an impressive run during Santa Anita’s winter/spring session.

“My agent works hard,” Hernandez notes. “He’s the one picking the good horses and he’s (the one) asking for us to ride. I just get on them and do the rest.”

Hernandez won his first rider’s title at Del Mar last fall when he unseated Flavien Prat from the top spot after finishing second to Prat during the summer meet. He won four graded stakes at Del Mar in 2021 and had 15 grade stakes victories overall last year. That exceeded the 11 he had collected from 2010 to 2020. This year, he won 15 graded stakes alone at Santa Anita. He says the keys to his success are quite simple. 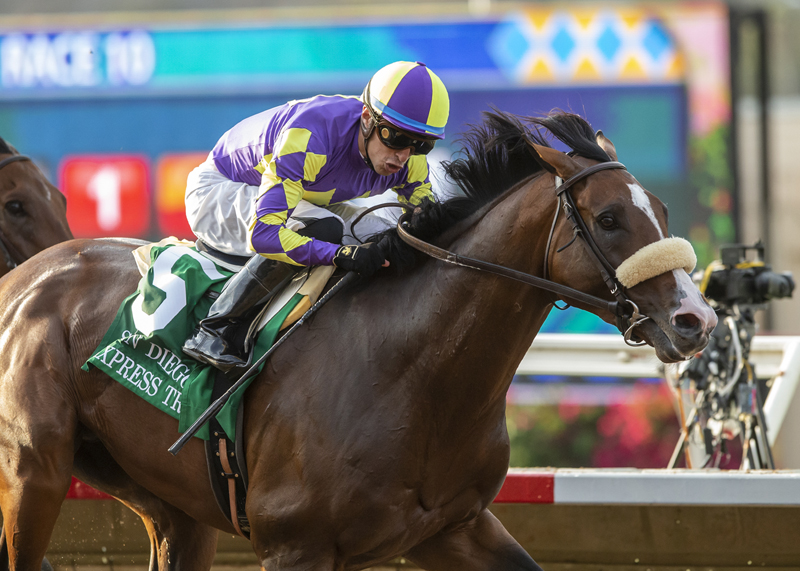 “A lot of dedication,” he says. “A lot of work in the mornings and the support from the owners and trainers.”

Being a jockey has been a lifelong dream for Hernandez, who spent his early years growing up on a small ranch outside of Vera Cruz, Mexico.

“They had cows and donkeys and work horses,” Hernandez says. “My dad was galloping the Quarter horses on the ranch and sometimes he would bring me (with him). He would also take me to the match races in Vera Cruz when he was riding. After the first race I was in love with horses and I knew I wanted to be a jockey. I was little and I always wanted to be like my dad.”

When Hernandez was nine, his family moved to Mexico City.

“My dad got a job at the racetrack,” Juan says. “Sometimes he would take me to the track and throw me on a horse after the horse galloped and I’d just take a couple turns in the shedrow. That was a good feeling for me ‘cause I was feeling like I was a jockey.”

As long as Hernandez can remember he dreamed of coming to the United States.

“Soon as I started riding in Mexico City, I was watching the races at Santa Anita and all over the USA because my dream was to come here and ride at these beautiful tracks,” he said.

Hernandez immigrated to the U.S. in 2009 and, had it not been for an understanding immigration official, his story could have been very different from the one we’ve seen play out over the past few years.

“I came here on December 24th,” Hernandez begins. “I went to Puerto Rico first. They have a big race over there for the Caribbean countries like Mexico, Panama, Puerto Rico and Venezuela. I got a visa for one month. So I went to Puerto Rico and rode there for two weeks. I finished second in the big race. I was a bug boy and won one race. A trainer I was riding for said: ‘You should ride in the USA before your visa expires.’ So I went back to Mexico and packed my things.”

Hernandez said he had a hard time getting into the U.S. because his visa was only for Puerto Rico. Finally, after four hours in an immigration office in San Francisco, amid threats of being sent back to Mexico, an officer allowed him entry.

The one week turned into two months and before long Hernandez had the papers and permission he needed to stay in the U.S. and pursue his riding career.

“I wanted to ride with the best riders here and when I told my parents I was coming here I was 17. My mom didn’t want me to leave but I told her it was for just a couple of years. I would make money, save money and then come back. So they said: ‘OK’.”

It’s now been 12 years and Hernandez has married and has two boys. Before coming to Southern California to ride fulltime, he left his mark on the Northern California circuit with a couple of riding titles at Golden Gate Fields, winning the 2020 winter/spring meet by 78 victories.

It’s not all hard work and no play for Hernandez. On his day off, he hits the gym in the morning and then might go play golf with some of the jockeys in the afternoon. But he mostly loves to spend time with his family. They’re in San Diego for the summer.

“We went to the zoo the other day,” Hernandez says. “They’re going to be here for another week and then they have to go back because my kids have school up in LA. I’m just trying to enjoy the time with them before they go back.”

He’s been riding horses since he was 6-years old and first got up on a Thoroughbred when he was 14. With the way things are going, there are going to be a lot of fellow jockeys who will rue the day that happened.