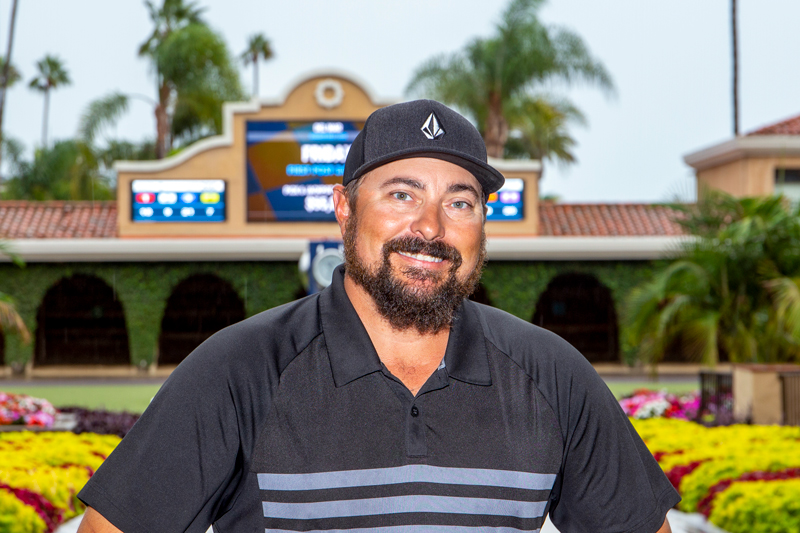 Everybody loves having a nice green lawn but very few like putting the work into maintaining one. Those grumblings you hear on the weekends generally belong to homeowners moments before going out to mow that nice green lawn.

So, if it makes you feel any better, the next time you have to break out the mower and trimmer to take on the front or backyard, think about John Beggin and the lawn he’s in charge of keeping nice and green.

Forty-one-year-old Beggin is the turf and landscape superintendent for Del Mar’s Jimmy Durante Turf Course. Ten and a half acres of lush green grass that not only has to look good, but also protect the horses that run on it every day during the summer and fall meets.

During his walk, Beggin measures the moisture in the soil and checks the penetration depth and the sheer strength of the grass.

“Once I do that,” Beggin says, “I go to the computer and upload it to the Racing Surface Laboratory and then I do it again after the racing.”

Overseeing the meticulous care of the turf course is an around-the-clock job, seven days a week, 52-weeks out of the year.

“On Thursday’s and Sunday’s we have turf works, horses training for upcoming races,” Beggin says. “I have three teams of five people set up at different gaps around the track and once the training is done, we have to repair the divots the horses leave in the grass.

“The crews just walk where the horses were, about fifty feet toward the outside rail, that’s where they train. We usually tamp and then we double check the other team’s tamps.”

They do the whole exercise again once the race goes off.

“Boom, the race goes,” Beggin says. “Now we have to hustle to get that starting gate out, typically 30-40 seconds. The first time I did it I thought, ‘This is crazy. This 15-ton starting gate is flying right by us, tires are just missing us.’ I usually do training runs before the season starts because you can explain it all you want but they actually have to do it.”

Beggin has been working at Del Mar for almost two years now. He started under former Del Mar turf superintendent Leif Dickenson, known as one of the best in the industry at taking fine care of Del Mar’s turf course. But before arriving at Del Mar, Beggin worked golf courses.

“I was a golf course superintendent at age 26,” he says. “I ran Red Hot Golf Course in Temecula for nine years then left to take on a 36-hole golf course in Menefee Lakes where I worked for five years. And I also oversaw another golf course in Hemet. Then the pandemic hit, crazy budget cuts and I got laid off.

“One of my old teachers, and a friend of Leif’s, reached out to me and told me to talk to the folks at Del Mar. We hit it off and I came in the following day. Then, just before the 2021 Breeders’ Cup, I had one of my old golf courses reach out to me and push for me to come back. So I left here in January of 2022.”

“He said he was taking a job in Florida and Del Mar needed me to come back,” Beggin said.

That was on June 20, one month before the start of the summer meet. Nonetheless, he signed on.

Beggin is quickly becoming a respected track superintendent in his own right. He applies the knowledge he learned working golf courses to maintaining the racing surface at Del Mar though, he says, there are some big differences between two.

“Golf you want everything fast and firm,” Beggin says. “Out here with horse racing we’re all about safety. We need consistent conditions. We need the grass to be nice and soft. You want the grass to take the impact, not the horse.

“On a golf course all the heights and cuts are super small and everything’s tight. On this (racetrack), we try to get the grass close to four inches. We want the soils to be super soft so there’s a different mix. This is a 70-30 blend of sand with fibers in it that were engineered for horse racing.”

Beggin says it’s not lost on him the huge responsibility that comes with this job.

“I think about it every day,” he says. “Every time those horses get on the track, I’m nervous.”

That being said, the safety record at Del Mar has been second to none over the past few years. Something Beggin takes a lot of pride in.

“Yes, we work so hard to keep those numbers consistent,” Beggin says. “It’s not that easy. I get pretty stressed.”

And when the meet ends on Sunday, Beggin’s job is just beginning.

“Then it’s a matter of rebuilding the Bermuda base for the fall meet,” he says. “That’s why we’re constantly moving the rail, to spread the wear.”

After the Bing Crosby meet, the work continues into the winter and spring, when they literally blanket the turf course.

“We do something pretty unique here,” Beggin says. “We use UV turf blankets and cover all 10 and a half acres. Two weeks on…two weeks off. It’s like a greenhouse effect. We’re the only place that will be mowing in January.”

The blankets stay on until May when the soil temperatures and air temperatures get back up. Then the cycle begins again to get the track ready for the summer meet.

As if that’s not enough, Beggin is also in charge of all of the many plants, bushes and flowers you see in the paddock and around the facility.

It helps to have a green thumb.