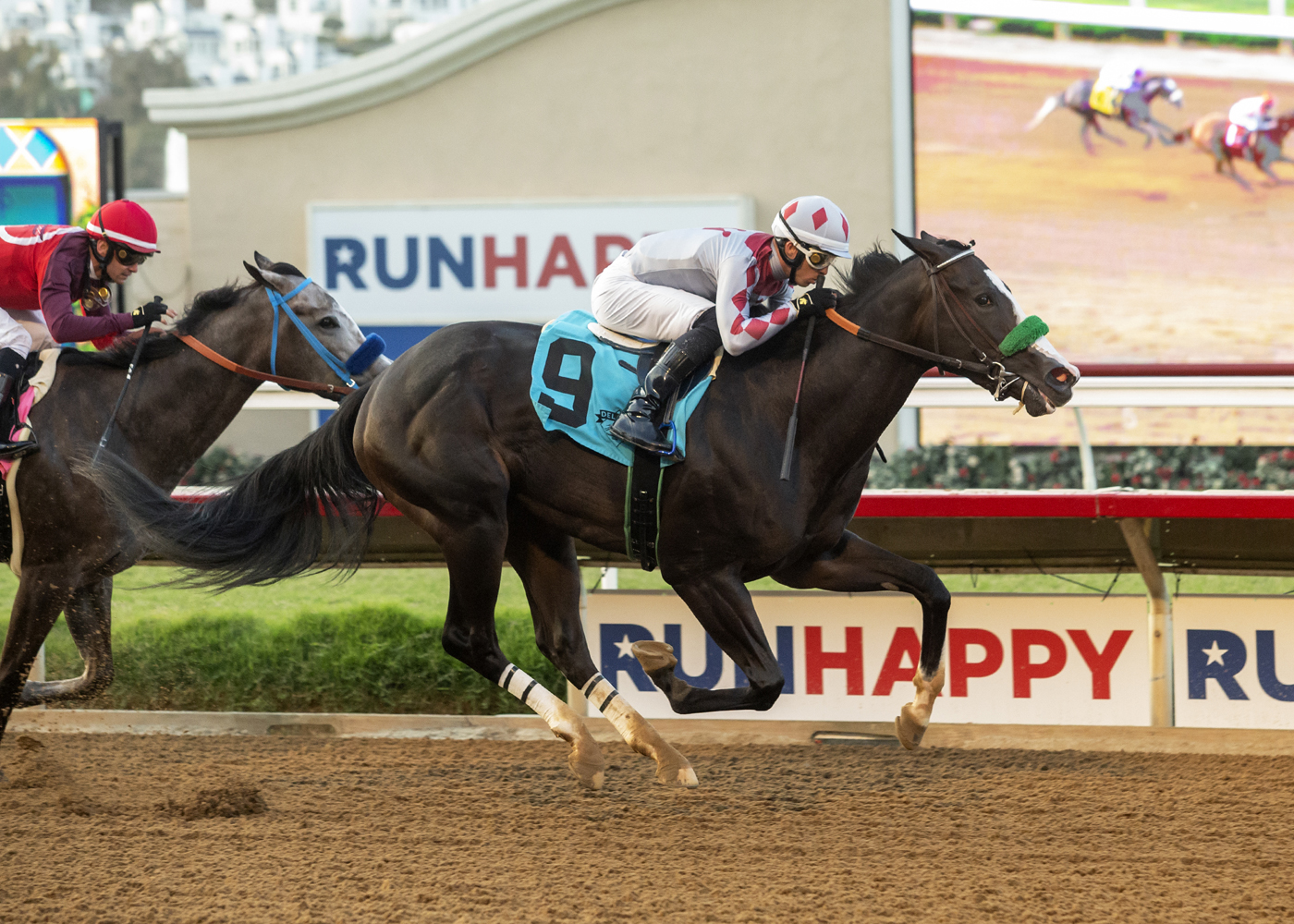 KMN Racing’s I’m So Anna fought off a determined rival in Red Baron’s Barn or Vaya Con Suerte’s Teddy’s Barino and drew clear late to tally by one length in the 36th edition of the Fleet Treat Stakes for 3-year-old California-bred fillies Friday at Del Mar.

The homebred daughter of the late stallion Fast Anna was hooked by Teddy’s Barino right from the git-go and was still fighting her off at the sixteenth pole. But the winner had a bit extra in the tank and got home to give rider Kyle Frey his first stakes win at Del Mar.

Teddy’s Barino finished second, a half length in front of the race favorite, Harris Farms’ Closing Remarks. Final time for the seven furlong test was 1:24.34.

I’m So Anna is trained by Steve Sherman, who races primarily in Northern California and had his father Art – famous for his handling of two-time Horse of the Year California Chrome – deputized for him today to saddle his dark bay or brown filly.

KYLE FREY (I’m So Anna, winner) – “She handled herself the other day in the route race (win on April 25 at Golden Gate) just fine and they ran quick early there, so I didn’t think the cutback in distance today was going to make a big difference. She had a pretty good battle down the lane (with Teddy’s Barino), but I wasn’t so much worried about the horse inside me, I was concerned about once coming from the back. That’s a bad way to lose a race. Yes, I was planning on heading back up (to his homebase) Northern California after a week here, but I’m doing so good I must admit I am seriously considering sticking around. We’ll see.”

ART SHERMAN, father of/assistant to Steve Sherman, who is at his base in Northern California (I’m So Anna, winner) – “She’s just a hard-trying filly. She’s won a couple of stakes (at Golden Gate Fields), we always loved her and we’ve had her down here before. She can run on the grass or the dirt. I’m looking at the replay and she was hooked all the way but showed her heart. She wants to beat you. I love her. The owner breeds some nice horses and Steve was lucky enough to get this filly as a 2-year-old. This stake has been on the radar for a while. You got a Cal-bred that can run, it’s nice.”

The victory was the first in a stakes race at Del Mar for rider Frey.

The stakes win was the first in the Fleet Treat and third overall at Del Mar for trainer Sherman.

The winning owners, KMN Racing, is the nom du course of Kimberly and Kevin Nish of Orlando, FL.