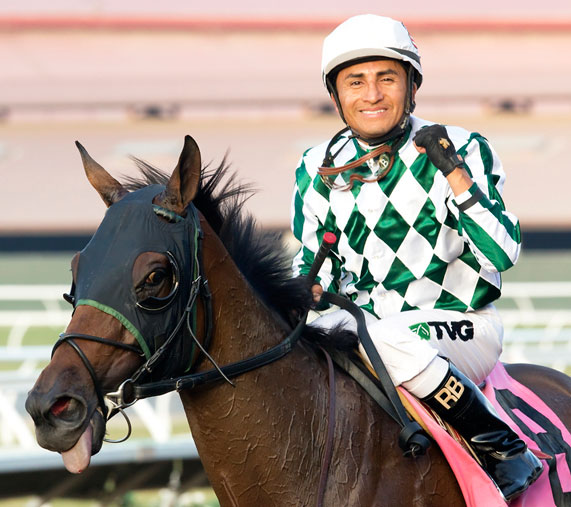 Honey Lake, an invader from the Midwest piloted by red-hot Rafael Bejarano, wore down 5-2 favored Dido in the stretch to win the featured $85,500 CTT and TOC Handicap for older fillies and mares at a mile and three-eighths over the Del Mar grass course Friday.
Giving Bejarano  his third victory of the afternoon, Honey Lake proved best by three-quarters of a length in 2:16.62. A rallying third, a head behind the runner-up, was Star Act, with Aguafria fourth in the field of nine distaff runners.
Honey Lake, a five-year-old daughter of Dynaformer trained by Vickie Oliver, was seventh in the Modesty Handicap at Arlington Park July 11, her most recent outing. The victory Friday was her fifth in 23 lifetime starts and first money of $50,700 increased her total to $263,658 for owner G. Watts Humphrey, Jr.
Sent postward at a generous 7-1, considering the presence of Bejarano, Del Mar’s defending riding champion, Honey Lake returned $17.80, $8 and $5.40. Dido, shipped to Del Mar from New York and  ridden by James Graham, paid $4.80 and $3, while Star Act returned $3.80 to show.
Bejarano, seeking his fourth consecutive Del Mar riding championship, increased his win total this summer to 28 with his triple Friday, eight more than runner-up Tyler Baze.  Bejarano’s earlier winners Friday were Rockin Robin at $11.40 in the third and Chief of Staff at $4 in the fifth.
With a two-day carryover of $303,229, $1,707,845 was wagered on Friday’s Pick Six for a total pool of $2,011,074. And, there were 37 perfect tickets, each paying  $32,943.40.
The Silver Anniversary running of the Grade I $1 million Pacific Classic will highlight Saturday’s program which starts at 2 p.m. The Pacific Classic is carded as the ninth race of an outstanding 11-race schedule. Five-year-old mare Beholder is the 5-2 morning line favorite.