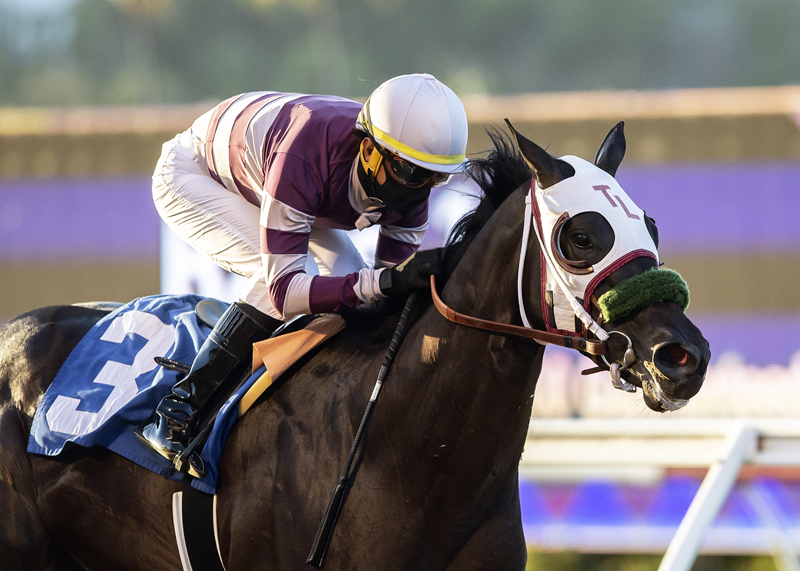 The daughter of Governor Charlie hung tough between two rivals early through quick splits, made the lead turning for home and then went clear for a four and one-half length triumph in 1:12.21 for the six furlongs.  As the second choice in the field of six femmes, she returned $6.80, $3.20 and $2.40 across the board.

Tiago Pereira handled the winner for trainer Lisa Bernard. That pair had teamed up with Governor Charlie here on August 1 to take down the CTBA Stakes. Both events are for California-bred runners.

For Pereira, this was his eighth stakes win at Del Mar. But for Bernard it was her second – in only her second start at the track. She’s two for two at the place “where the turf meets the surf” and both have been black type events.

The winner picked up a check for $57,000 for her tally pushing her earnings to $144,000 for her perfect three-for-three record. She had broken her maiden at Santa Anita on May 29.

Rider Pereira was one of three jockeys to win a pair of races on the card. The others were Mario Gutierrez and Abel Cedillo.

In the day’s Pick Six, nobody was able to select all six winners and there will be a carryover of $140,031 into tomorrow’s card. Additionally, there is a Jackpot carryover of $216,559 to go along with it for a possible single ticket holder.

The track’s Late Pick 5 provided a windfall for a lone ticket holder who collected $750,793 after investing $1,296 in his/her ticket through the Oregon hub of Xpressbet. Among the horses the winner tabbed was Hoop Dreams ($64.40) in the 8th race and Tilted Towers ($38.00) in the 9th race.

There will be a special Monday card at Del Mar tomorrow featuring nine races and starting at 2 p.m.

TIAGO PEREIRA (Governor Goteven, winner) – “Lisa (trainer Lisa Bernard) said get a good spot with her. She broke really well and we were in a good spot right from the start. I was taking pressure, but she was OK with it. Then she just started to pull away. She’d been training well for this. She’s a nice filly.”

LISA BERNARD (Governor Goteven, winner) – “I was feeling a lot of nerves (during the race). But I trust this filly and she has been training awesome. We had high expectations, but you don’t know until they prove themselves out there, especially with 2-year-olds. In her daily training you can see she wants to run. It’s in her blood. That’s what she wants to do. It definitely is a dream come true. There’s no words to describe it.”

The stakes win was the second of the meet for rider Pereira, but his first in the Generous Portion. He now has eight stakes wins at Del Mar.

The stakes win was the second of the meet for trainer Bernard, but her first in the Generous Portion. She now has two stakes wins at Del Mar.