Good With People Hangs On to Capture I'm Smokin Stakes 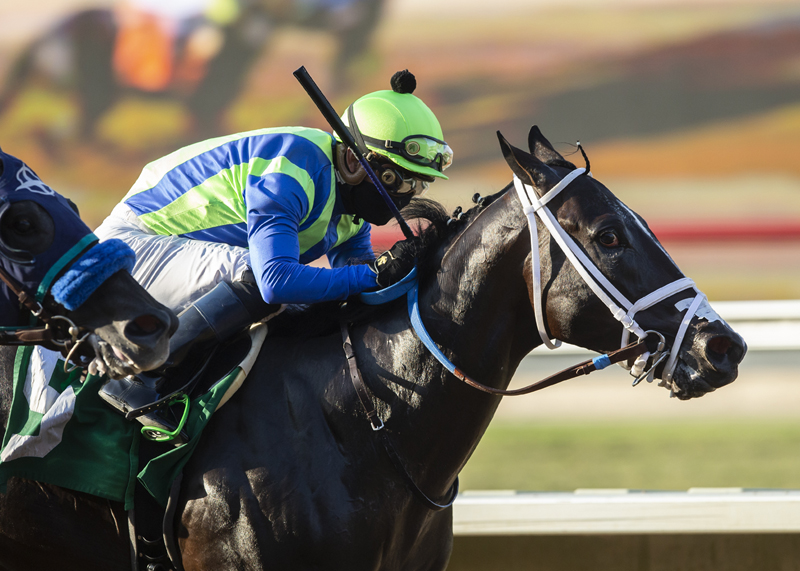 J. Kirk and Judy Robison’s homebred Good With People adjusted nicely to an equipment change and got the money in the 31st running of the I’m Smokin Stakes for California-bred 2-year-olds Friday at Del Mar.

The son of the Curlin sire Curlin to Mischief had blinkers taken off today for his third start and it settled him enough to where rider Abel Cedillo was able to save his energy early and come away with a half-length victory in the six-furlong stakes. The colt took down the $57,000 winner’s share from the total purse of $94,000 after running the six panels in 1:10.37.

Finishing second in the dash was Brown, Jr., Klein and Lebherz’s Touchdown Brown and running third was Litt or Solis II’s Tacoflarovedkisses. There were six scratches from the original field of 10 runners, so only four horses went.

Peter Miller trains the winner and it was his sixth stakes victory of the Del Mar meeting. It was also rider Cedillo’s sixth stakes tally of the session.

The riding star of the afternoon was the track’s leading rider, Umberto Rispoli, who scored three times, all on turf. He now has 45 first after 24 racing dates and leads Flavien Prat by three winners. Trainer Richard Baltas had a good afternoon with three victories, bringing his total for the session to 11, fourth best among all trainers.

There are three racing days left in the 81st summer season at the seaside oval and all three will start with an early post of 1 p.m. All three will have 11-race cards with six stakes races still to be run over the weekend.

ABEL CEDILLO (Good With People, winner) – “The last time I rode him (Graduation Stakes August 2), we had an easy lead and he got real tired. I suggested to Peter (trainer Miller) that we take the blinkers off to help him relax. That’s just how it worked today. We went to the front, but he did it easily. He had enough late this time to get the job done.”

PETER MILLER (Good With People, winner) – “We took the blinkers off and I think that made the big difference. He was a little too aggressive last time with the blinkers and he couldn’t see the horses coming at the end. We worked him without the blinkers and he did really well. And Abel (Cedillo) did a good job. It got a little close at the end. He looked like a winner last time, too, at the eighth pole and the 16th pole, so I wasn’t counting my eggs before they were hatched.”

The victory was the sixth stakes wins of the meeting for rider Cedillo, but his first in the I’m Smokin. He now has eight stakes wins at Del Mar.

The stakes win was the sixth of the meet for trainer Miller, but his first in the I’m Smokin. He now has 35 stakes wins at Del Mar.

The winning owners and breeders, J. Kirk and Judy Robison, are from El Paso, TX.