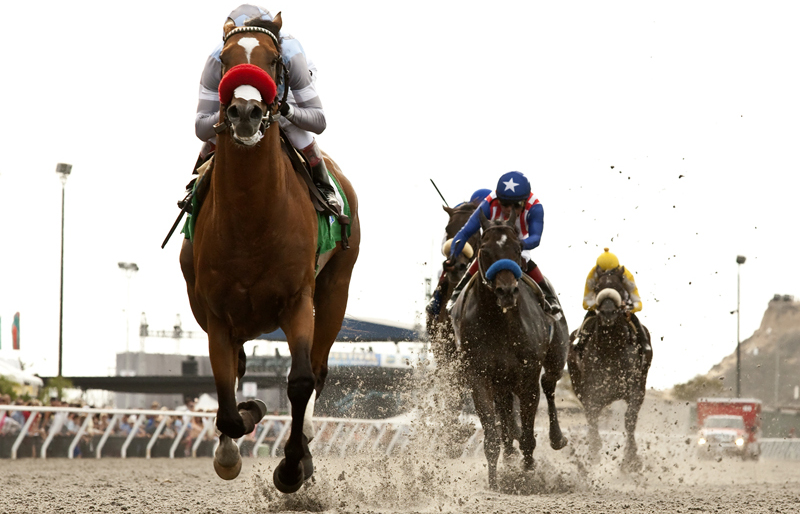 Goldencents, second in three Del Mar sprint stakes going back to the 2013 meeting, left no doubt as to his superiority Sunday as he won the Grade II $250,000 Pat O'Brien Stakes from wire-to-wire under jockey Rafael Bejarano.

Sent to the lead from the start of the seven-furlong dash, Goldencents, the 8-5 second choice, set a fast pace and blazed home with a final furlong in 12 seconds to score by 4   lengths in 1:20.99, setting a track record. The former mark of 1:21.12 was established by Fed Biz a year ago in the O'Brien. Fed Biz was second Sunday as the 3/2 favorite under Martin Garcia

Goldencents, whose most important victory came  in the Breeders' Cup Dirt Mile at Santa Anita last November, had been runner-up in both the Bing Crosby and O'Brien Stakes last summer and was second again in this summer's Bing Crosby, losing to Big Macher narrowly after traffic trouble.

The four-year-old Into Mischief colt is owned by W.C. Racing, Inc., which is Glen Sorgenstein and Josh Kaplan of Santa Monica, CA, and trained by Doug O'Neill.

Fed Biz was 1 length ahead of Silentio for the runner-up spot, with Syndicated another three-quarters of a length back in fourth place in the field of seven sprinters. Big Macher was sixth. Diamond Bachelor was scratched from the original field.

The Pat O'Brien Stakes is a Breeders' Cup "Win and You're In" contest qualifying the winner for an expenses-paid berth in the Breeders' Cup Dirt Mile, the race Goldencents won last year.

RAFAEL BEJARANO (Goldencents, winner) -- "He broke so good today and that was the big difference. Last time (Bing Crosby S. at Del Mar July 27) we had a bad break and we couldn't get to where we wanted to be. I've been waiting for a race like this and for him to be able to do his thing. I stayed busy on him to the end. I didn't want him to let up."

MARTIN GARCIA (Fed Biz, second)  -- "He ran OK today. Just OK. The winner is a good horse. They are both good horses. But my horse can run better than he did this time."

VICTOR ESPINOZA (Silento, third) -- "They went way too slow that first quarter. I needed some pace. It was a good effort for me horse, but he didn't have anything to run at."

DOUG O'NEILL, (Goldencents, winner) -- "That was the plan -- to be aggressive with him. Rafael (Bejarano) gave him a brilliant ride. There was some talk that Fed Biz would be on the lead but we took it to  em. The first quarter went twenty-two and four and we were on the lead. He knows the horse well and this is a brilliant horse as shown by this performance."

BOB BAFFERT (Fed Biz, second) -- "Nobody was going to beat the winner today. He had his own way on the lead. Fed Biz really isn't a seven-eighths (7-furlong) horse. I think he ran well. I'm going to stretch him out next time and he'll tell us if he's OK to go to the Breeders' Cup."

The stakes win was the third of the meet for Bejarano, but his first in the O'Brien. He now has 40 stakes wins at Del Mar.

The stakes win was the second of the meet for O'Neill, but his first in the O'Brien. He now has 24 stakes wins at Del Mar.

The owners of the winner are W. C. Racing, which is Glen Sorgenstein and Josh Kaplan of Santa Monica, CA.