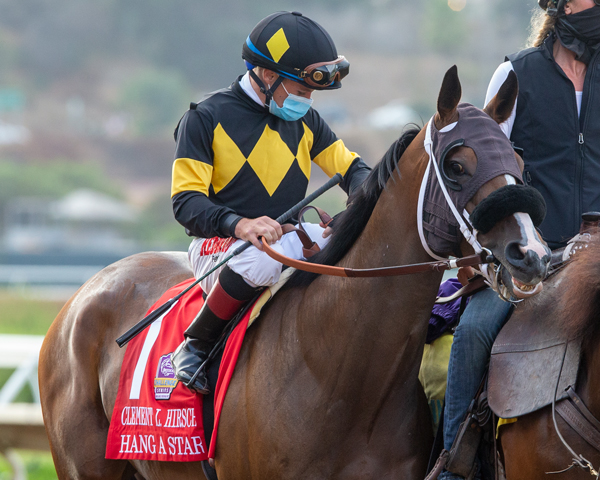 Friday’s 16th edition of the Tranquility Lake Stakes, an overnight that carries a purse of $75,000 and is run at a mile on the main track, has lured a field of five – four of them fillies and one mare.

One of the fillies, the 4-year-old Hang a Star, looms as the horse to beat in the feature based on a couple of things: first, she’s been pitched high in her recent efforts – Grade I, II and III stakes. Second, she gets reunited with the meet’s leading rider, Umberto Rispoli, and that’s proven a good thing for many a horse at the session so far.

Hang a Star, owned by Seltzer Thoroughbreds and trained by Ian Kruljac, breaks from Post 2 in the compact field and seems to have enough speed to set up in a good stalking position for the test. The Kentucky-bred daughter of Tapizar has won two of nine lifetime starts with $127,311 in her account and appears to have the makings of a solid distaff competitor.

Smiling Shirlee, the lone 3-year-old in the lineup, will have Drayden Van Dyke in the boot and trainer Jeff Bonde in the paddock to give his rider a leg up. The California-bred daughter of Smiling Tiger races for the trio of Brown, Jr., Klein or Lebherz and has been right in the thick of things with Cal-bred stakes horses in her three most recent starts. Those were all against 3-year-old competition, however, and she’s meeting older and stronger rivals for this one.

The speed of the race appears to be Baoma Corp’s Message, a 4-year-old by Warrior’s Reward who has show good “lick” in all of her nine outings. She’s come away a winner twice and can boast of a bankroll that reads $103,516. Flavien Prat has the call for trainer Bob Baffert and they might be playing “catch me if you can” on Friday.

Proud Emma, a 4-year-old chestnut by Include, has won four races and $205,158 and was a good second in an allowance race at Del Mar on August 16. She wears the silks of the partnership of Gem Inc, Kagele or Tartaglione and trainer Peter Miller has named Hall of Fame rider Mike Smith to take the controls for this go-round.

The lone mare in the gathering is Zusha, a 5-year-old daughter of the A.P. Indy stallion Congrats. She’s finished in the top three in 11 of her 21 starts and has earned $219,393. Abel Cedillo will be aboard for trainer Gary Mandella in the Friday contest.