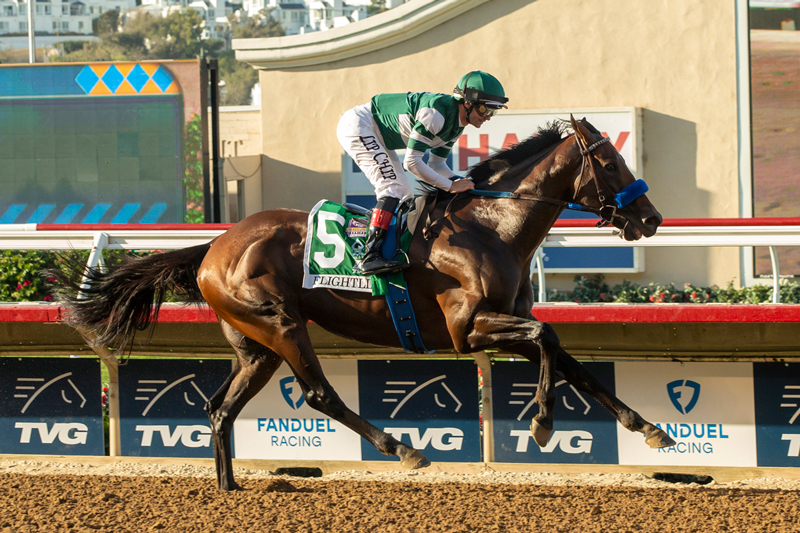 In one of the most brilliant performances in the history of Del Mar racetrack, unbeaten Flightline staked his claim as the outstanding older Thoroughbred in America with a 19 l/4 length victory in the Grade I, $1 million TVG Pacific Classic Saturday. It was a record winning margin, eclipsing the 12 ½ length triumph by Accelerate in the 2018 Pacific Classic.

His final time of 1:59.28 was only 17 one-hundredths of a second slower than the track record set by Candy Ride in the 2003 renewal of the mile and one-quarter contest.

With regular rider Flavien Prat in the saddle, Flightline was content to rate off of Extra Hope in the early going, took command without being asked midway down the backstretch, then opened up on the far turn, leaving his five rivals far behind and cruised to the wire in majestic style.

Flightline, a 4-year-old son of Tapit, is owned by Hronis Racing and Summer Wind Equine and partners. The colt is trained by John Sadler, who was winning his fourth Pacific Classic in the last five years.

The Pacific Classic is a Breeders’ Cup “Win and You’re In” race, thus, Flightline has clinched a berth in the Breeders’ Cup Classic at Keeneland in Kentucky in early November.

The win was Flightline’s fifth success in as many starts and first money of $600,000 increased the horse’s earnings to $1,394,800. He was purchased for $1 million as yearling.

FLAVIEN PRAT (Flightline, winner)—“I let him stay out in the middle of the track through the stretch the first time because I wanted to have him relaxed and comfortable.  I didn’t want to get him on the rail and be bottled.   When we went into the final turn, he was traveling so well I asked him to pick it up a little bit.  As soon as I looked back and saw how far in front he was, I wrapped up on him.  Obviously, this is the best horse I ever rode.”

JOHN VELAZQUEZ (Country Grammer, second)  -- “Wow. What can you say. We were in another race and I was riding my horse trying to win it.”

MIKE SMITH  (Royal Ship, third) –“What can you say about the winner. I just know he was gone. I was trying my best for second. That’s all you can do in a race like this.”

JOHN SADLER (Flightline, winner) – “I thought (we had it) fairly early on. This horse has a high cruising speed. Once he was flowing, I knew we were in good shape. We had a lot of confidence going in. The distance was the question today and he answered the question.

“Did I think he could do that – win like that? Kinda yeah. You don’t want to say it in front of the race, but now that he’s done it….The thing about him is that he’s fast and he can carry it. Some horses are fast, but they can’t go on. This horse can. He’s an exceptional horse.”

BOB BAFFERT (Country Grammer, second)-- “I told Johnny, don’t chase that horse he’s (Flightline) a really great horse; if you chase you won’t get anything. I wanted to run at least second to him. We got beat by an incredible horse; it was nice to see the crowd clapping for him and it was fun watching the performance even as a competing trainer; it’s something you don’t see every day. I knew my horse was going to show up, he was doing well and he didn’t chase the horse and he just got beat by a brilliant horse today.”

RICHARD MANDELLA (Royal Ship 3rd, Extra Hope, 5th)- “In races they have to actually leave the gate and get to the wire first, so anything can happen. When you’ve got horses like we’ve got, you have to try, we ran third and fifth…. Unbelievable winner; there’s not words to describe him, he’s really something”

The stakes win was the second of the meet for rider Prat and his second (Higher Power, 2019) in the TVG Pacific Classic. He now has 79 stakes wins at Del Mar, 10th most among all riders.

The stakes win was the third of the meet for trainer Sadler and his fourth in the TVG Pacific Classic. He now has 85 stakes wins at Del Mar, second most of all trainers.

The winning owners are Hronis Racing of Kosta and Pete Hronis of Delano, CA. They have a series of partners in the horse including Summer Wind Equine and West Point Thoroughbreds.