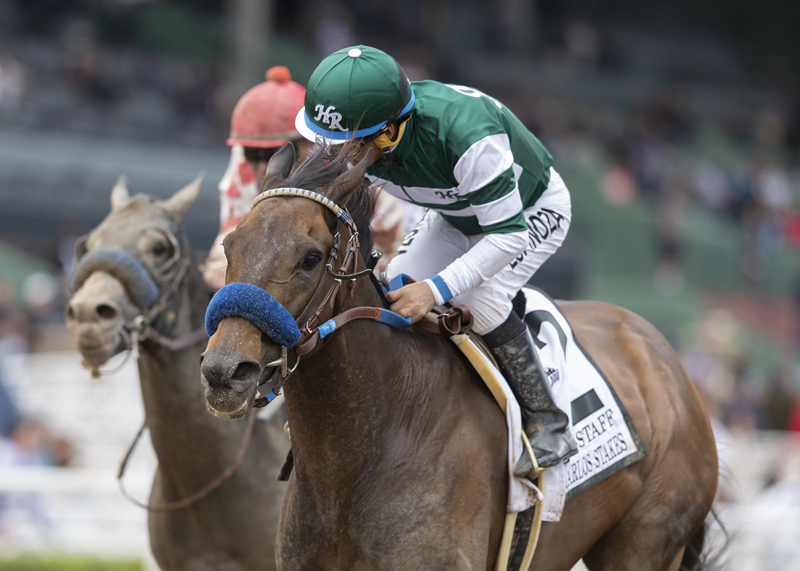 Flagstaff is a lovely, little town in the mountains of Northern Arizona. Flagstaff is also a very fast racehorse who could be tough to beat at Del Mar Saturday afternoon in the 35th running of the Pat O’Brien Stakes.

The O’Brien, a seven-panel spin for 3-year-olds and up, carries a purse of $150,000 and Grade II status. It also is a Breeders’ Cup “Win & You’re In” race that guarantees the victor entry with all fees paid to the $2,000,000 BC Dirt Mile to be run on Saturday, November 7 at Keeneland in Kentucky.

Flagstaff, the horse, is a 6-year-old gelding by 2004 sprint champion Speighstown who has been judiciously spotted and raced by trainer John Sadler for the Kentucky-bred’s owners -- Lanes End Racing or Hronis Racing. He didn’t make it to the races until his 4-year-old season and only shows 13 starts in total. Five of them have been wins, though -- the last two coming in stakes at the O’Brien’s seven-furlong distance -- and he sports earnings that read $485,785.

Hall of Fame rider Victor Espinoza, who has been aboard in most of the horse’s starts, has the call again Saturday and they’ll break from Post 4 in the eight-horse lineup.

The chief treat to Flagstaff is likely to be the comebacking Giant Expectations, a 7-year-old horse by Frost Giant who races for the partnership of David Bernsen and Exline-Border Racing and is trained by Peter Eurton. The winner of $1,336,600 will be making his first start in nearly 10 months and gets Del Mar’s leading rider, Umberto Rispoli, along for the outing.

Giant Expectations has a history with both the Pat O’Brien and the BC Dirt Mile. He won the former back in 2017 as a 4-year-old, then ran second in it last year. He’s run in the BC Dirt Mile the last three years, though he hasn’t had much success in the race. The 2019 BC Dirt Mile on November 2 at Santa Anita was his most recent start.

Here’s the full O’Brien field from the rail out with riders and morning line odds:

C Z Rocket is the lone out-of-towner to tackle the local sprinters. California trainer Peter Miller claimed the City Zip gelding for $40,000 at Oaklawn Park this past April and subsequently won three straight races with him in Kentucky. He was shipped to Monmouth Park in New Jersey in July, but never started there. He’s won seven races and $341,641.

Law Abidin Citizen was the third-place finisher in the six-furlong Bing Crosby Stakes earlier in the Del Mar meet. The 6-year-old gelding by Twirling Candy has won seven races and more than $500,000, all out of the barn of trainer Mark Glatt.

P R Radio Star will be trying to win his first stakes race in his 31st start. The 5-year-old gelding by Warrior’s Reward has won twice already at the current Del Mar meet, taking a pair of allowance sprints.

First post for the 11-race Saturday card is 2 p.m.