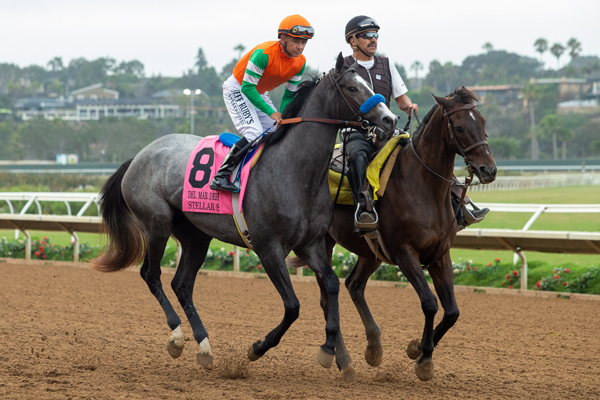 Five extra quick fillies and mares will put the pedal to the metal at Del Mar Friday afternoon in the 50th edition of the  Grade III, $100,000 Rancho Bernardo Handicap at six and one-half furlongs.

Favoritism in the dash will be an interesting contest all its own. Three of the fillies are eligible to step into that role off recent efforts – LNJ Foxwoods or La Providencia’s Scotish Star, Don Alberto Stable’s Stellar Sound and Hronis Racing’s Edgeway. All are 4-year-olds, all carry topweight of 123 pounds and all have shown exceptional “lick” in sprint races.

Scotish Star will be making her second U.S. start for Hall of Fame trainer Richard Mandella. The Argentinian miss by the Deputy Minister stallion Key Deputy won twice easily in her native land as a 2-year-old and then just missed in her six-panel North American debut at Del Mar on July 29. She gets leading rider Flavien Prat back in the boot for the Rancho Bernardo.

Stellar Sound, a gray by Tapit, beat Scotish Star in that July 29 race, getting up in the last jump to win by a neck. She’s a three-time winner who has been stakes-placed on several occasions and trainer Mike McCarthy has designated rider Juan Hernandez to handle her once more Friday.

Edgeway is a daughter of Competitive Edge who has won four of her seven outings and banked $319,200. She captured the Carousel Stakes at Oaklawn Park in April and has the sort of speed that could put her on the lead as the fastest of the fast in this lineup. Trainer John Sadler has designated Joe Bravo as his filly’s pilot.

The Rancho Bernardo goes as Race 6 on an eight-race card. First post for the day is the usual Friday 4 p.m. start.