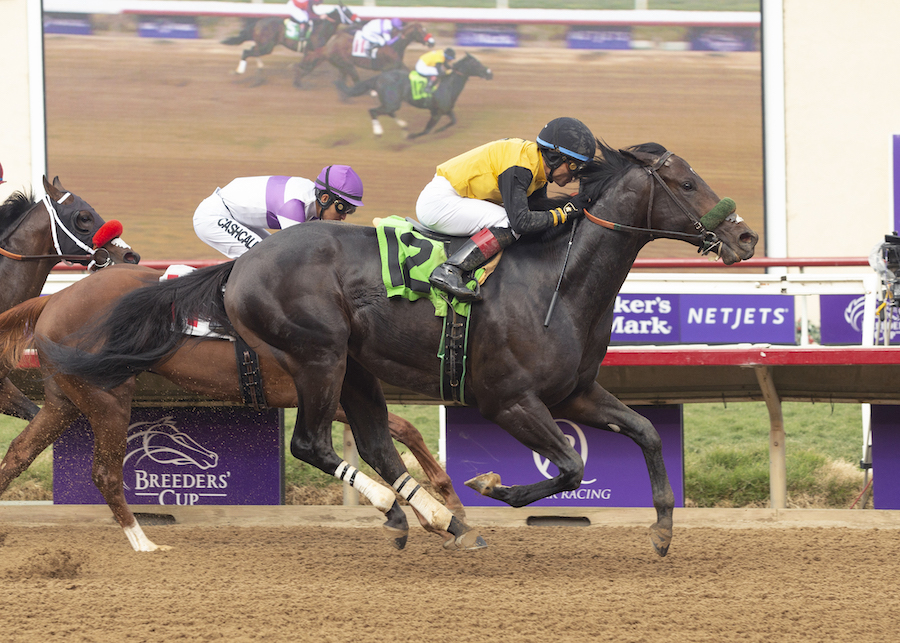 Given a patient, well-tiimed ride by jockey Joel Rosario, Lovingier, Fasihuddin and Navarro’s Finneus rallied determinedly in the stretch to win the $175,000 Golden State Juvenile for California-bred two-year-olds, the fourth and final added money-event on the undercard of Friday’s Breeders’ Cup Championships at Del Mar.

Placed in mid-pack in the early stages of the seven-furlong sprint, Finneus forged to the front nearing the wire to tally by a half-length over even-money favored Slow Down Andy,with Fast Draw Munnings third in the field of a dozen runners.

Finneus, trained by Walther Solis, stepped the seven furlongs in 1:23 flat and paid $10, $4 and $3 after his second success in six starts. He is a son of Stay Thirsty. Runner-up Slow Down Andy returned $3 and $2.60, while Fast Draw Munnings paid $4.80 to show.

JOEL ROSARIO (Finneus, winner) – “No special instructions (from trainer Walther Solis). He just said hold him together and give him a good ride. My trip was good all the way. And he was game. That’s the best kind of horse to ride.”

WALTHER SOLIS (Finneus, winner) “He’s a special horse and every single race he’s learning more and more. He’s going to get to the point where he really has it figured out. This was a better race than (runner-up in) the Del Mar Futurity. He was a little bit closer up today and now he’s switching leads on time. The first couple races he didn’t want to switch leads and that makes a lot of difference.”

The stakes win was the 31st at Del Mar for rider Rosario.

The stakes win was the first of the meet and the third at Del Mar for trainer Solis.